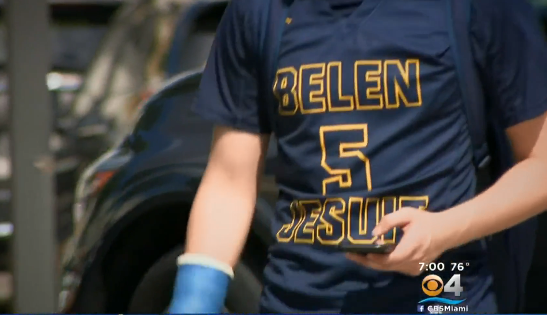 MIAMI -- A student at a South Florida private school who claims he was a victim of hazing is the son of a Miami-Dade police officer, CBS Miami reports. The 16-year-old high school student at the historic Belen Preparatory School said he was abused in English teacher Cristina Ramirez's class last week after he failed to bring in a bottled water donation for the annual school festival.

The school is now short an English teacher as Ramirez -- a veteran of more than two decades -- is on leave while police investigate the alleged incident.

A transcript of a police incident report obtained by CBS Miami, and a police source with direct knowledge of the case, said the alleged victim told investigators Ramirez directed two other students to tie him to a chair with caution tape, similar to police crime scene tape, and for students to pelt him with "non-lethal" objects.

The report said the boy was hit with paper balls and shoes that were thrown at him. The police source said pencils were also among the projectiles.

According to the report, the student claims the teacher provided the tape.

The student admitted uttering a crude vulgarity to the teacher and was ordered to serve a one-day suspension that was lifted after the alleged hazing was reported.

Ramirez's lawyer has flatly denied all the allegations.

Attorney Giorgio Ramirez, who is also the teacher's brother, told CBS Miami "the student making these allegations did issue an apology to my client, in writing, for his foul language."

"My client did not participate in, or direct, or witness any hazing of this student," the attorney said.

The lawyer provided CBS Miami with a copy of the student's apology in which the teen said, "I would never mean to disrespect anyone in such a way." The apology note makes no mention of any hazing incident, which allegedly preceded the vulgar outburst.

Comments on the site were overwhelmingly supportive of the teacher.

"This is an injustice of the highest order. Ms. Ramirez is one of the best educators to ever walk the halls of Belen," read one entry.

Miami-Dade Police said they are handling the Belen complaint as they would any other, and that the student's father being one of their own has not influenced their investigation.

"We investigate our officers and officers involved in some way in numerous cases, routinely," said Det. Robin Pinkard, a department spokesperson.

They said that if the allegations are true, they are quite serious.

The state attorney's office, a department spokesperson said, would make a final decision on what charge or charges, if any, might be brought and against whom in the alleged Belen incident.