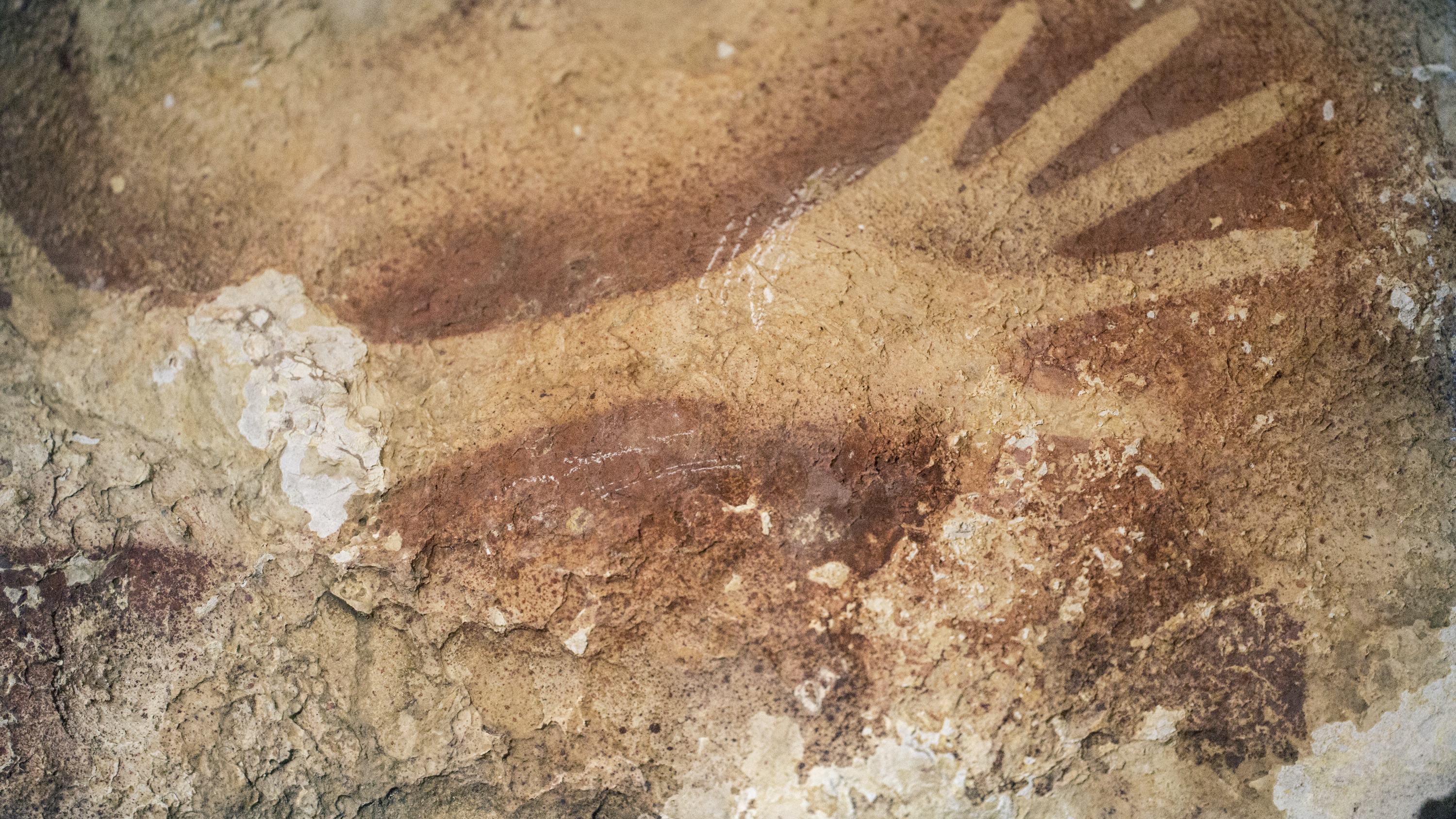 WASHINGTON -- Ancient cave drawings in Indonesia are as old as famous prehistoric art in Europe, according to a new study that shows our ancestors were drawing all over the world 40,000 years ago.

And it hints at an even earlier dawn of creativity in modern humans, going back to Africa, than scientists had thought.

Archaeologists calculated that a dozen stencils of hands in mulberry red and two detailed drawings of an animal described as a "pig-deer" are between 35,000 to 40,000 years old, based on levels of decay of the element uranium. That puts the art found in Sulawesi, southeast of Borneo, in the same rough time period as drawings found in Spain and a famous cave in France.

And one of the Indonesian handprints, pegged as at least 39,900 years old, is now the oldest hand stencil known to science, according to a new study published Wednesday in the journal Nature.

These are more than 100 Indonesian cave drawings that have been known since 1950. In 2011, scientists noticed some strange outcroppings -- called "cave popcorn" -- on the drawings. Those mineral deposits would make it possible to use the new technology of uranium decay dating to figure out how old the art is. So they tested the cave popcorn that had grown over the stencils that would give a minimum age. It was near 40,000 years.

"Whoa, it was not expected," recalled study lead author Maxime Aubert, an archaeologist and geochemist at Griffith University in Australia.

Looking at the paintings, the details on the animal drawings are "really, really well-made," Aubert said in a phone interview from Jakarta, Indonesia. "Then when you look at it in context that it's really 40,000 years old, it's amazing."

Paleoanthropologist John Shea of Stony Brook University in New York, who wasn't part of the study, called this an important discovery that changes what science thought about early humans and art.

Before this discovery, experts had a Europe-centric view of how, when and where humans started art, Aubert said. Knowing when art started is important because "it kind of defines us as a species," he said.

Because the European and Asian art are essentially the same age, it either means art developed separately and simultaneously in different parts of the world or "more likely that when humans left Africa 65,000 years ago they were already evolved with the capacity to make paintings," Aubert said. Ancient art hasn't been found much in Africa because the geology doesn't preserve it.

Shea and others lean toward the earlier art theory.

"What this tells us is that when humans began moving out of Africa they were not all that different from us in terms of their abilities to use art and symbol," Shea said in an email. "Inasmuch as many of us would have difficulty replicating such paintings, they may even have been our superiors in this respect."