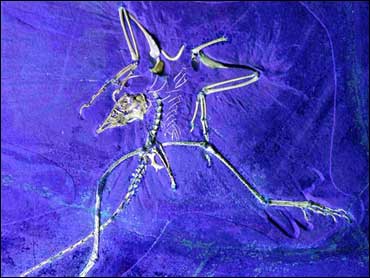 Recent fossil discoveries that showed feathers on some of the early flying animals, like the well-known Archaeopteryx, created a bit of a flap in the archaeological world.

And now comes a report that those feathers may have been too weak for use in flapping flight helpful only for gliding.

Robert L. Nudds and Gareth J. Dyke report in Friday's edition of the journal Science that the central shaft of feathers on Archaeopteryx and Confuciusornis were much more slender than on feathers of similar-sized birds today.

Unfortunately, researchers cannot tell from the fossils if the feather shafts were hollow, like modern birds, or were solid.

If their feathers were hollow the thin shafts would have buckled like a drinking straw if the animals had tried vigorous flapping, according to Nudds, of England's University of Manchester, and Dyke, of University College, Dublin, Ireland.

"If solid, the feathers would have snapped off," Nudds said.

"Some thrust generation by these fossil birds cannot be discounted, but the vigorous flapping flight of modern birds is highly unlikely," the researchers concluded.

Nudds said poor flight ability suggests that the early birds lived in trees and would launch in order to glide to another tree. If they landed on the ground they could clamber back up to gain height for their next glide.
"If Archaeopteryx and Confuciusornis were arboreal dwellers, which is suggested by my data, then it also suggests that avian flight originated in the trees and not on the ground," he said.

"Fossil wings that superficially resemble those of existing birds don't necessarily indicate flapping flight ability," concluded Nudds, who added that the origin of avian flapping flight is likely to be more recent than previously thought.