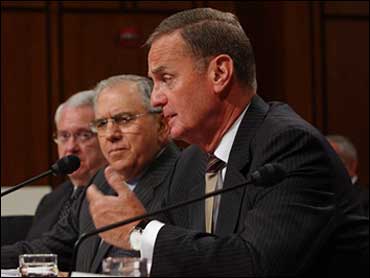 A panel of retired senior military and police officers recommended Thursday that the United States reduce its presence in Iraq to counter the image that it is an "occupying force."

The panel said significantly cutting down the number of U.S. troops and allowing Iraqi forces to take over more daily combat missions by early next year would be "possible and prudent."

"The force footprint should be adjusted in our view to represent an expeditionary capability and to combat a permanent-force image of today's presence," said retired Marine Corps Gen. James Jones, who led the 20-member commission.

"This will make an eventual departure much easier," Jones told the Senate Armed Services Committee.

The readiness of Iraq's security forces will be an important element in the congressional debate over the war. Republicans see success by the Iraqi forces as key to bringing U.S. troops home, while an increasing number of Democrats who control Congress say the U.S. should stop training and equipping such units altogether.

The review is one of several studies that Congress commissioned in May, when it agreed to fund the war for several more months but demanded that the Bush administration and outside groups assess U.S. progress in the four-year war.

Jones' report, released Thursday, concluded that Iraqi security forces would be unable to take control of their country in the next 18 months. If Iraqi troops were to be given more of a lead, as envisioned by the panel, it is still expected U.S. troops would still play a substantial role by providing logistics and other support, as well as continued training.

Jones said he personally would not support setting a deadline for troop withdrawals, as many as Democrats want.

"I think deadlines can work against us," Jones said. "I think a deadline of this magnitude would be against our national interest."

Instead, Jones said the U.S. would have to adjust force levels carefully so as not to lose security gains made by the recent troop buildup.

"The foundation of all U.S. policies with regard to Iraq is predicated on the ability of this sovereign nation to muster the forces . . . to take over security," said Sen. John Warner, the No. 2 Republican on the Armed Services Committee who drafted the legislation that commissioned the study.

Sen. Carl Levin, chairman of the Armed Services Committee, said the study challenges the Pentagon's assertion that more than half of Iraqi army and police battalions can operate in the lead so long as they have U.S. support.

"It's my observation that fewer, far fewer, are actually now in the lead," said Levin, a Democrat. "That raises questions, which I hope the commission will address, as to why more Iraqi units should not be given the lead responsibility that they are capable of now."

A senior Pentagon official said Wednesday that the U.S. military does not believe the Iraqi national police should be disbanded but acknowledges that getting the Iraqi army up to speed will take a while.

The study found that the Iraqi military, in particular its Army, shows the most promise of becoming a viable, independent security force with time. It predicted that an adequate logistics system to support these ground forces is at least two years away.

"They are gaining size and strength, and will increasingly be capable of assuming greater responsibility for Iraq's security," the report says of military units, adding that special forces in particular are "highly capable and extremely effective."

Worse off is the Iraq police force. It describes them as fragile, ill-equipped and infiltrated by militia forces. And they are led by the Ministry of Interior, which is "a ministry in name only" that is "widely regarded as being dysfunctional and sectarian, and suffers from ineffective leadership."

Jones' panel recommended scrapping Baghdad's national police force and starting over.The United States has spent $19.2 billion on developing Iraq's forces and plans to spend another $5.5 billion next year. According to Jones' study, the Iraqi military comprises more than 152,000 service members operating under the Ministry of Defense, while the Ministry of Interior oversees some 194,000 civilian security personnel, including police and border control.

A separate independent study released Tuesday by the Government Accountability Office found that Iraq had not met 11 of 18 political and security goals - a blunt assessment that challenges President Bush's findings on the war as he prepares to announce plans for the U.S. military campaign..

Meanwhile, Mr. Bush vigorously defended his troop buildup on Wednesday, and got a boost when Australian Prime Minister John Howard said his country's forces would remain in Iraq for the foreseeable future.

"If I didn't think we could succeed, I wouldn't have our troops there," Mr. Bush said. He added that it was important "that we hang in there with the Iraqis and help them."