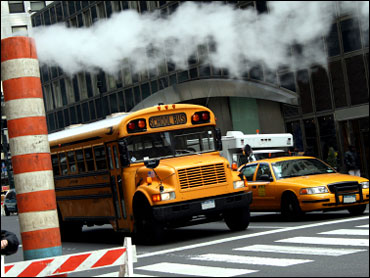 New York City produces nearly 1 percent of the nation's greenhouse gas emissions — an amount that puts it on par with Ireland and Portugal — according to a city study.

The study, released Tuesday, was ordered by Mayor Michael Bloomberg to assess the city's progress in reducing its greenhouse gas emissions by 30 percent by 2030. It was conducted by the mayor's Office of Long-term Planning and Sustainability.

"You have to have a real baseline or we're just talking past each other as to what works and what doesn't work — we won't ever know whether we really made a difference," Bloomberg said.

The study found that the buildings, subways, buses, cars and decomposition of waste in America's most populous city produced a net emission of 58.3 million metric tons of greenhouse gases in 2005. The U.S. total was 7.26 billion metric tons for that year.

Greenhouse gases, including carbon dioxide, methane and other gases, essentially trap energy from the sun, which warms the Earth's surface and lower atmosphere. Many scientists believe human activity that increases those gases is contributing to global warming.

The Intergovernmental Panel on Climate Change, a United Nations network of 2,000 scientists, warned last week of possible catastrophic risks such as floods, disease, food shortages, species extinction and human suffering throughout the world.

With 2.7 percent of the country's population — 8.2 million of 300 million — the average New York City resident contributes less than a third of the emissions generated by a typical American. This is largely due to the popularity of the city's mass transit system, which cuts down on car emissions, officials said.

The operation of the city's hundreds of thousands of buildings — which consume electricity, natural gas, fuel oil and steam — contribute 79 percent of the city's emissions total.

"Each one of these things really does make a difference, and they add up," Bloomberg said.

Still, emissions were found to have increased by more than 8 percent between 1995 and 2005, the study found.