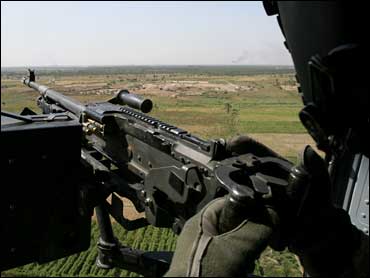 Iraq's security forces have made "uneven progress" and will be unable to take over security on their own in the next 12 to 18 months, according to an independent assessment.

The study, conducted by a 20-member panel led by retired Gen. James Jones, is one of several independent studies Congress directed in May. A copy of the 37-page report was obtained by The Associated Press.

Overall, Jones found that Iraqi military forces, particularly the Army, show "clear evidence of developing the baseline infrastructures that lead to the successful formation of a national defense capability." But Baghdad's police force and Ministry of Interior are plagued by "dysfunction."

"In any event, the ISF will be unable to fulfill their essential security responsibilities independently over the next 12-18 months," the report states.

Jones, a former commander of U.S. troops in Europe and Marine Corps Commandant, is scheduled to testify before Congress on Thursday. Defense Secretary Robert Gates and other officials have already been briefed on the study, officials said last week.

A separate independent study released Tuesday by the Government Accountability Office found that Iraq had not met 11 of 18 political and security goals - a blunt assessment that challenges President Bush's findings on the war as he prepares to announce plans for the U.S. military campaign..

Meanwhile, Mr. Bush vigorously defended his troop buildup on Wednesday, and got a boost when Australian Prime Minister John Howard said his country's forces would remain in Iraq for the foreseeable future.

"If I didn't think we could succeed, I wouldn't have our troops there," Mr. Bush said. He added that it was important "that we hang in there with the Iraqis and help them."