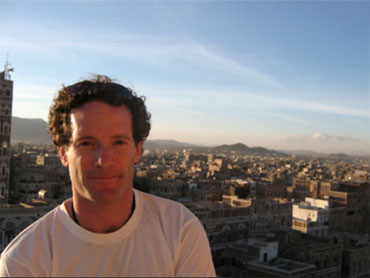 To understand radical Islam, American writer Theo Padnos pretended he was a Muslim and settled himself into Yemen's radical mosque scene. Years later, his cover has finally been blown. This GlobalPost story was written by David Case.

The dorm -- a long corridor lined with shoebox rooms shared by roommates -- was just like any other student dwelling, aside from the stained glass windows, the ornate woodwork and loudspeakers blaring with Islam's predawn call to morning worship: "Prayer is better than sleep."

It was like any other student dwelling -- aside from the absence of music. Or posters. Or women. Contact with the opposite sex was strictly banned.

When he wasn't studying the Quran, Theo Padnos -- barefoot, and usually dressed in a flowing white robe -- says he would wander down the hall, to see who was around.

Living several doors away was the dorm's requisite quiet kid, who shared a room with one of Padnos' good friends. Back in Memphis, the kid's name had been Carlos Bledsoe. In Sanaa, Yemen, everyone knew him as Abdul Hakim Mujahid Muhammad. Although he was nice to his friends, who were mainly other black Americans, he was suspicious and rarely spoke when Padnos was in the room.

"Abdul Hakim was taciturn, withdrawn, maybe depressed," Padnos recalls. "He didn't like me very much. He was an 'are you with me or are you against me' kind of guy. And he felt I was against him."

"He felt that I was a fake Muslim," Padnos says.

In June 2009, the quiet kid pushed through the doorway of a U.S. military recruiting center in Little Rock, Ark., and opened fire with a semi-automatic rifle, killing one soldier and wounding another. More recently, he passed a note to a judge admitting his crime, and claiming that he was a member of Al Qaeda in the Arabian Peninsula. He faces capital murder charges in an Arkansas court.

On the topic of Padnos, Carlos Bledsoe/Abdul Hakim was right to be suspicious. Padnos now admits that he was indeed a "fake" Muslim. A curly-haired Vermont native who holds a Ph.D. in literature, in 2005 Padnos converted to Islam at a mosque in Yemen, in front of witnesses.

But he says he never really believed in the religion. He professed his faith in a quest to gain access to Yemen's most forbidden Salafist institutions: places rarely, if ever, visited by non-believers, the mosques and madrassas that breed devout radicals and, in some cases, violent jihadists.

Until late 2008, he spent most of his time in Yemen, polishing his Arabic and burnishing his Islamic credentials, until he managed to visit some of those radical outposts.

Padnos has long wrestled with speaking publicly about the experience. Several years ago, he landed a book contract, but at the last moment he took his publisher to court to suppress publication. He says he had to pay back his advance, plus a 200 percent penalty, a significant financial loss for a writer who has barely been employed in recent years. He says he felt that the manuscript wasn't good enough to justify the potential outrage and danger to his life that it would generate. Since then, he has continued living in the Middle East.

Finally, this year his cover has been blown. In the aftermath of the Fort Hood massacre and the attempted Christmas Day underwear bombing -- both of which were allegedly inspired by a vibrant Yemeni arm of Al Qaeda -- Padnos wrote a commentary in the London Review of Books that hinted at his inside knowledge of Yemen's Salafist milieu. He later granted interviews in Germany, to a newspaper and a television program. This tipped off a Yemeni reporter, who in February published an article disclosing his multi-year stint as a fake Muslim.

The article, according to a security expert, accused him of falsely converting to Islam as a ruse to fool Yemenis and gain their trust. "That'll certainly put you on a few hit lists," according to the expert.

Read the rest of the story at GlobalPost.com