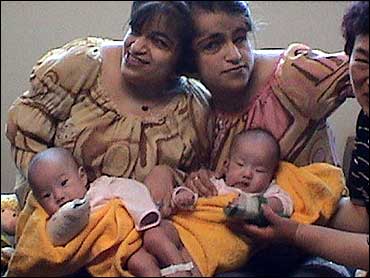 Doctors said the operation was a success and that both twins were resting in stable condition in the intensive care unit.

Dr. Thong Pao Wen, a consultant in the operation, said the mood in the operating room two or three hours into the surgery was "euphoric" because the staff realized the girls were going to be fine.

Doctors were afraid that if the twins were not separated they would develop severe skull and spinal deformities because of the way they would have been forced to position themselves.

The procedure came just two weeks after a team of surgeons from Raffles Hospital failed to successfully separate Ladan and Laleh Bijani, Iranian twins born joined at the head. The 29-year-old sisters died in the operating room, 90 minutes apart, from massive blood loss.

Before their deaths, the Bijani sisters saw the Korean sisters on several occasions while they underwent evaluation for their separation surgery, Kumar said. Ladan and Laleh "were quite fond" of the Korean babies and developed an "emotional attachment" to them, he said.

The Bijani sisters' surgery was the first attempt by doctors to separate adult twins joined at the head.

Separation surgery on conjoined adults is more difficult than that on infants. And head separation is riskier than other kinds.

The Korean twins are the third set of conjoined twins to undergo risky separation surgery in Singapore in two years.