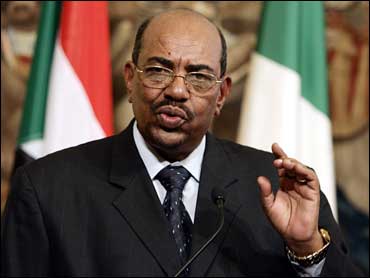 Sudan's President Omar al-Bashir said Friday his government is ready to implement a cease-fire with rebel forces at the start of peace talks over the conflict in Darfur, scheduled for next month in Libya.

It was the first time al-Bashir - in Italy to meet with the Pope and Italy's leaders - had called for a cease-fire since the announcement last week that U.N.-backed peace talks will take place in Tripoli, Libya, beginning Oct. 27. A top rebel leader has demanded that hostilities end before negotiations can begin.

"We have announced we are willing (to put in place) a cease-fire with the start of the negotiations to create a positive climate," al-Bashir said at a news conference following talks with Italian Premier Romano Prodi.

"We hope that the negotiations in Tripoli will be the last ones and that they will bring a final peace," al-Bashir said.

Khartoum has regularly agreed to cease-fires but all have been quickly breached by the parties involved in the conflict.

More than 200,000 people have died and 2.5 million have been uprooted since ethnic African rebels in Darfur took up arms against the Arab-dominated Sudanese government in 2003.

Sudan's government is accused of retaliating by unleashing a militia of Arab nomads known as the janjaweed, a charge Khartoum denies.

Abdel Wahid Elnur, who leads a major faction of the Sudan Liberation Movement rebels, has said negotiations should not start until a cease-fire is in place and a planned U.N.-African Union joint peacekeeping force is on the ground. U.N. officials have said troops could start to deploy in October for the 26,000-strong joint peacekeeping force.

Al-Bashir said he had asked Prodi to push those European countries hosting rebel leaders to pressure them to take part in the talks, mentioning particularly Elnur, who is based in Paris.

Prodi praised al-Bashir's offer of a cease-fire saying that "this is an important signal, a strong signal that I welcomed with favor."

Al-Bashir's offer came just four days after a major attack launched by his forces against units of the Justice and Equality rebel group in Haskanita, a small town in northern Darfur. Sudanese army helicopter gunships and Antonov aircraft bombed the town in violation of a U.N. military flight embargo, killing over a dozen people.

Al-Bashir, who came to power in 1989 in a military and Islamic coup, was making a rare, high-profile visit to Western Europe that raised concern from human rights advocates and some politicians.

The Vatican said that Pope Benedict XVI and al-Bashir spoke for 25 minutes at the papal summer residence in Castel Gandolfo in the Alban Hills southeast of Rome.

Vatican spokesman the Rev. Federico Lombardi described the atmosphere during the talks as "very respectful."

"One could see there was a great commitment by Sudan for this meeting, as demonstrated by such a high-level delegation with evident care to showing great attention and respect for the Vatican," Lombardi told reporters.