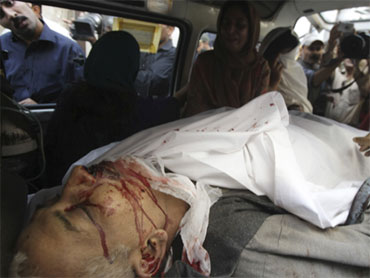 Pakistani news reports say another bomb has exploded in the eastern city of Lahore, hours after twin suicide bombings killed at least 43 people and wounded about 100.

It would be the third time this week that Lahore has been hit by a bomb attack.

Earlier today a pair of suicide bombers targeting army vehicles detonated explosives within seconds of each other, striking RA Bazaar, a residential and commercial neighborhood where several security agencies have facilities.

About 10 of those killed were soldiers, said Lahore police chief Parvaiz Rathore.

Security forces swarmed the area as thick black smoke rose into the sky and bystanders rushed the injured into ambulances.

Video being shot with a mobile phone just after the first explosion showed a large burst of orange flame suddenly erupting in the street, according to GEO TV, which broadcast a short clip of the footage shot by Tabraiz Bukhari.

"Oh my God! Oh my God! Who are these beasts? Oh my God!" Bukhari can be heard shouting after the blast in a mixture of English and Urdu.

Some of the wounded were missing limbs, lying in pools of blood after the explosions, eyewitness Afzal Awan said.

Hours later, a series of small explosions terrified residents in a different Lahore neighborhood and injured at least three people.

Police officials said the four low-intensity blasts apparently resulted from loose explosives - not packed bombs - scattered through the residential area. While the explosions sent police and rescue workers racing through the area, there were no immediate reports of deaths or major damage.

The latest attacks indicate Islamist militants are stepping up violence after a period of relative calm.

No group immediately claimed responsibility, but a senior Pakistani intelligence official in Islamabad tells CBS News investigators are looking into a possible link to Lashkar-e-Jhangvi - a notorious militant group from Punjab. The province is home to more than 60 percent of Pakistan's population of 180 million.

Lashkar-e-Jhangvi, a hardline group which espouses a rigid interpretation of Sunni Islam, is known for having carried out a number of attacks on members of Pakistan's Shiite Muslim majority. Bokhari reports the group was banned in Pakistan after its links to the Taliban and al Qaeda were discovered.

"This attack has immediately prompted an investigation into links with Lashkar-e-Jhangvi," said the intelligence official, who spoke to CBS on condition of anonymity. "For the past few weeks, there were reports of this group planning a big attack in the Punjab."

(CBS)
Taliban militants and their allies are believed to have been behind scores of attacks in U.S.-allied Pakistan over the last several years, including a series of strikes that began in October and killed some 600 people in apparent retaliation for an army offensive along the Afghan border.

The Taliban claimed an army of 3,000 willing suicide bombers, ready to deploy across the country unless the military operations against its ranks were halted. Those operations are ongoing.

In more recent months, the attacks have been smaller, fewer and confined to remote regions near Afghanistan.

But on Monday, a suicide car bomber struck a building in Lahore where police interrogated high-value suspects, killing at least 13 people and wounding dozens. The Pakistani Taliban claimed responsibility.

Also this week, suspected militants attacked the offices of World Vision, a U.S.-based Christian aid group, in the northwest district of Mansehra, killing six Pakistani employees, while a bombing at a small, makeshift movie theater in the main northwest city of Peshawar killed four people.

The violence comes amid signs of a Pakistani crackdown on Afghan Taliban and al Qaeda operatives using its soil. Among the militants known to have been arrested is the Afghan Taliban's No. 2 commander, Mullah Abdul Ghani Baradar.

The U.S., meanwhile, has pursued al Qaeda and Taliban fighters in Pakistan's northwest tribal belt using missile strikes. The Pakistani Taliban chief, Hakimullah Mehsud, is believed have died in one such strike in January, though the Taliban have denied that.

During the bloody wave of attacks that began in October - coinciding with the army's ground offensive against the Pakistani Taliban in the South Waziristan tribal area - Lahore was hit several times.

In mid-October, three groups of gunmen attacked three security facilities in the eastern city, a rampage that left 28 dead. Twin suicide bombings at a market there in December killed nearly 50 people.

Meanwhile, Pakistan's navy successfully test-fired a series of missiles and torpedoes Friday in what it called a message to "nefarious" forces - an apparent reference to longtime rival India.