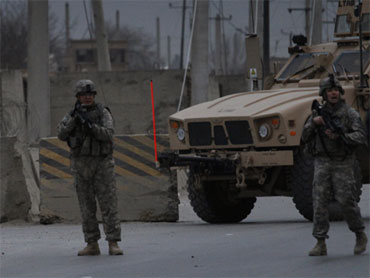 A suicide car bomber attacked a military convoy near a U.S.-run base in Afghanistan's capital Tuesday. Officials say at least six people were wounded.

The Taliban claimed responsibility for the attack, in a text message to The Associated Press from a phone number commonly used by the insurgent group.

The target was an international military convoy, the extremist group said.

The convoy was traveling down a busy road near Camp Phoenix in Kabul, when a car bomb approached it and detonated.

U.S. and NATO forces rushed to the scene, as Afghan police blocked the road to protect rescuers from further attacks.

An Associated Press reporter at the scene saw the wreckage of a vehicle from afar.

The attacker was driving a minibus laden with explosives that wounded at least six Afghan civilians when it went off, said Jamil Jumbish, the head of Afghanistan's criminal investigation unit. Jumbish said he had no reports of deaths but added that he did know if there were any casualties among NATO forces.

CBS News correspondent Mandy Clark writes that for American soldiers patrolling the crowded streets of Kabul, today's attack is another reminder that any passing car could pose a deadly threat.

The head of Kabul's criminal investigations unit confirmed that it was a suicide car bomber but said he was on his way to the scene and did not yet have further details.

The strike follows on . The Jan. 18 attack paralyzed the city for hours and left five civilians and Afghan security forces dead, along with the seven assailants.