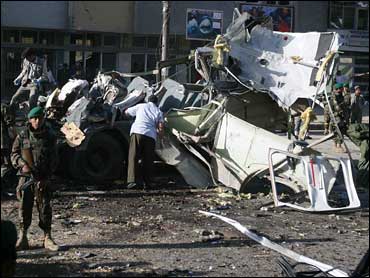 A suicide bomber wearing an Afghan army uniform set off a huge explosion Saturday while trying to board a military bus in the capital, killing 30 soldiers, officials said. The Taliban claimed responsibility.

The blast, which also injured 30 people, ripped off the roof of the bus and tore out its sides, leaving a charred hull of burnt metal. The attack was reminiscent of the deadliest insurgent attack in Afghanistan since the U.S.-led invasion in 2001 - when a bomber boarded a police academy bus at Kabul's busiest transportation hub in June and killed 35 people.

Dozens of civilians and police officers picked through the site in search of bodies.

"For 10 or 15 seconds, it was like an atom bomb - fire, smoke and dust everywhere," said Mohammad Azim, a police officer who witnessed the explosion.

A purported Taliban spokesman, Zabiullah Mujahid, claimed the militant group was responsible for the blast in a text message to The Associated Press. Mujahid said the bomber was a Kabul resident named Azizullah.

The bus had stopped in front of a movie theater to pick up soldiers when a bomber wearing a military uniform tried to board around 6:45 a.m. local time, army spokesman Gen. Mohammad Zahir Azimi said.

"They know who should be on the bus," Hasas said. "Whenever they see a stranger's face, they should prevent them from getting close."

The theater, a restaurant and a pharmacy were among several shops that were badly damaged. Body parts were scattered in all directions; police and soldiers climbed trees to retrieve some.

A woman who lives nearby was woken up by the explosion, which shattered her bedroom window, cutting her feet. The blast's force sprayed a chunk of scalp onto a nearby rooftop.

Sulahdin, an army officer at the scene who goes by one name, said about 50 people were on the bus. Adbul Karim, a witness, said several people in the back of the vehicle survived.

Taliban attacks typically target international and Afghan military and police, though civilians are often killed or wounded as well. The Taliban have launched more than 100 suicide attacks this year, a record pace.

More than 4,500 people have been killed in insurgency-related violence this year, according to an Associated Press count based on figures from Western and Afghan officials.

Meanwhile, the International Committee of the Red Cross has established contact with the armed group that kidnapped four of its workers but no progress has been made, officials said Friday.

The four ICRC employees - a national from Myanmar, one from Macedonia and two from Afghanistan - were seized Wednesday in the central province of Ghazni while trying to secure the release of a German captive.

"We have established contact with all parties concerned with the aim of resolving this situation as quickly as possibly," said Graziella Leite, an ICRC spokeswoman in Afghanistan.