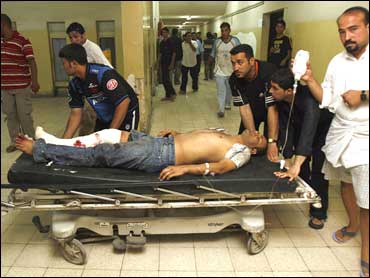 A suicide car bomber detonated his explosives-packed Mercedes near a row of stores in the Shiite militia stronghold of Sadr City on Saturday, killing at least 15 people, police and hospital officials said.

The attack in the eastern Baghdad enclave came as at least 36 other people were killed or found dead in Iraq, including four who died in a bombing of an outdoor market in the Shiite holy city of Kufa.

A bombing also killed at least 13 people in the nearby Shiite neighborhood of Baladiyat on Wednesday.

Violence has been unrelenting in Iraq and the suicide bombing in Baghdad was among a series of attacks tempering U.S. claims of success in taming the capital just days before a pivotal progress report is due to be delivered to the U.S. Congress by the top commander in Iraq Gen. David Petraeus and U.S. Ambassador Ryan Crocker.

"It has not worked out as we had hoped," he wrote, offering a preview of what he planned to tell U.S. legislators in hearings that begin Monday amid a fierce debate over whether President Bush should begin withdrawing troops from Iraq.

The British military, meanwhile, said 500 troops would be withdrawn from Iraq in coming months as part of its planned reduction in forces as Iraqis assume control of their own security in southern Iraq. The withdrawals will reduce the British force in Iraq to 5,000, based around Basra, Iraq's second-largest city, 340 miles southeast of Baghdad.

Basra, a predominantly Shiite city, has been largely calm since the British soldiers pulled back from the city center to the airport last Sunday, ceding responsibility to Iraqi security forces.

U.S. commanders have warned that Sunni insurgents would step up attacks ahead of the Petraeus-Crocker report to try to influence the debate. They also appeared to be determined to try to provoke Shiite militia violence even as radical Shiite cleric Muqtada al-Sadr ordered his fighters to stand down for up to six months.

The attacker in Sadr City was believed to be aiming for a busy market but was forced to detonate his explosives early after Iraqi police fired at his car, devastating a barber shop and other nearby stores.

Two barbers and six clients were among the 12 people killed, a police official said, speaking on condition of anonymity because he wasn't authorized to release the information.

Associated Press Television News footage showed the charred wreckage of several cars that were destroyed in the blast, with pools of blood left on the pavement. A man with a cast on his leg lay on a hospital bed in an overwhelmed emergency room as people fanned patients with pieces of paper to offer relief from the searing summer heat amid electricity shortages.

The overall number of civilians killed in Iraq has declined since Mr. Bush ordered some 30,000 American troops to Baghdad and surrounding areas earlier this year, but suspected Sunni insurgents have managed to stage several spectacular bombings despite the stepped up security measures.

A prominent Sunni politician warned the drop was a "temporary improvement" that would be reversed by Prime Minister Nouri al-Maliki's failure to achieve national reconciliation.

"We need a liberal government, we need a secular government, without such a government the violence will continue," Saleh al-Mutlaq told Al-Jazeera in an interview from Amman, Jordan, on Al-Jazeera.

Al-Mutlaq's comments came as his Sunni party, the Iraqi National Dialogue Front, announced it was ending its parliamentary boycott so it can participate in the debate over stalled benchmark legislation demanded by Washington, including a draft law on sharing Iraq's oil riches. The party has only 11 of the 275 seats and its return has only limited effect.

A law aimed at returning thousands of members of Saddam Hussein's ousted Baath Party to government appeared to be the closest to being ready, with deputy parliament speaker Khaled al-Attiyah saying Saturday that discussion on the measure should begin in parliament soon.

"We will receive it today or tomorrow and then it will be put forward in parliament for discussion this week," al-Attiyah told The Associated Press by telephone.