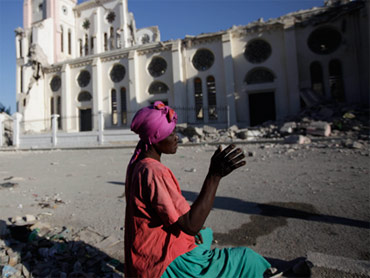 Drumbeats called the faithful to a Sunday Mass praising God amid a scene resembling the Apocalypse - a collapsed cathedral in a city cloaked with the smell of death, where aid is slow to reach survivors and rescue crews battle to pry an ever-smaller number of the living from the ruins.

Sunlight streamed through what little was left of blown-out stained windows as the Rev. Eric Toussaint preached to a small crowd of survivors. A rotting body lay in its main entrance.

"Why give thanks to God? Because we are here," Toussaint said. "We say 'Thank you God.' What happened is the will of God. We are in the hands of God now."

As Catholic and Protestant worshippers across the city met for their first Sunday services since the magnitude-7.0 quake, many Haitians were still waiting for food and water and some took vengeance against looters.

Rescue workers were frustrated by the struggle to get aid through the small, damaged and clogged airport run by U.S. military controllers, and to get it from the airport into town.

Doctors Without Borders said Sunday that a cargo plane carrying a field hospital was denied permission to land at the airport and had to be rerouted through the Dominican Republic - creating a 24-hour delay in setting up a crucial field hospital.

U.N. Secretary-General Ban Ki-Moon called the quake "one of the most serious crises in decades."

"The damage, destruction and loss of life are just overwhelming," he said before flying toward Haiti on Sunday.

Nobody knows how many died in Tuesday's quake. Haiti's government alone has already recovered 20,000 bodies - not counting those recovered by independent agencies or relatives themselves, Prime Minister Jean-Max Bellerive told The Associated Press.

At the roofless cathedral, elderly women worried the beads of their rosaries and prayed for the intervention of Our Lady Of The Ascension, to whom the 81-year-old church is named.

A military helicopter roared overhead, drowning out a hymn by the congregation. Above loomed the partially destroyed office of the archbishop who died nearby and another building whose blown-out walls had laid it open it like a doll's house.

An apparently demented elderly woman began preaching on the sideline of the Mass: "Where is our justice? Now the palace of justice has been broken down ... we are all infected by disease. The end is near."

Amid the struggle for food, some turned to looting, infuriating people struggling to guard what little they still have.

Two suspected looters lay on the street in the Delmas neighborhood of Port-au-Prince, both beaten and with their hands bound together. Some in the angry crowd that gathered around them said they had been attacked by angry residents, others that police had caused their wounds.

One lay completely motionless, his dreadlocked hair stained by a deep pool of dark crimson blood. The other lay bleeding profusely but occasionally twitched his leg.

A few hours later, a reporter found both men were dead. However they got that way - whether vigilante justice or police execution - all agreed that they were criminals who had escaped from the destroyed prison.

There were also occasions of joy: An American team pulled a woman alive from a collapsed university building where she had been trapped for 97 hours. Near dawn, another crew rescued three survivors from deep in the pancaked ruins of a supermarket.

And a woman was pulled alive, dehydrated but otherwise uninjured, from the ruins of the Montana Hotel, to the applause of onlookers.

The son of co-owner Nadine Cardoso said he could hear her voice from the rubble. Twelve hours later, with more than 20 friends and relatives watching, she was lowered from a hill of debris on a stretcher.

"It's a little miracle," her husband, Reinhard Riedl, said after hearing she was alive in the wreckage. "She's one tough cookie. She is indestructible."

But the rescue was bittersweet for Cardoso's sister Gerthe: Rescuers had to abandon a search for her 7-year-old grandson after an aftershock closed a space where he was believed to be.

The U.N. itself lost at least 40 confirmed dead - including its mission chief Hedi Annabi - with hundreds still missing. "For the United Nations, this is the gravest and greatest single loss in the history of our organization," Ban said.

But the U.N. secretary-general said the agency was already feeding 40,000 and hopes to feed 2 million within a month.

Florence Louis, seven months pregnant with two children, was one of thousands of Haitians who gathered at a gate at the Cite Soleil slum, where U.N. World Food Program workers handed out high-energy biscuits for the first time.

"It is enough because I didn't have anything at all," said Louis, 29, clutching four packets of biscuits.

On a hillside golf course, perhaps 50,000 people were sleeping in a makeshift tent city overlooking the stricken capital and paratroopers of the U.S. 82nd Airborne Division flew in to set up a base for handing out water and food.

At the cathedral, the Rev. Toussaint described his own near-miraculous survival.

"I watched the destruction of the cathedral from this window," he said, pointing to a window in what remains of the archdiocese office. "I am not dead because God has a plan for me."

"What happens is a sign from God, saying that we must recognize his power - we need to reinvent ourselves,"

Others, however, were angry.

"It's a catastrophe and it is God who has put this upon us," said Jean-Andre Noel, 39-year-old computer technician "Those who live in Haiti need everything. We need food, we need drink, we need medicine. We need help."