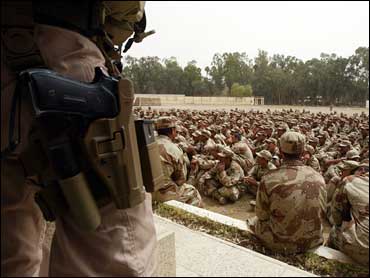 This report was written by CBS News correspondent Allen Pizzey.


The discovery of bodies of executed Iraqi soldiers in Ramadi — believed to have been targeted by insurgents simply because they chose to serve their country — would at first blush seem to be just another example of what has become a terrible routine. What makes this instance remarkable is that the men were part of the first all-Sunni Muslim unit, which staged a mini-revolt at their graduation last Sunday when told they had to serve away from their hometowns.

These men had wanted to be assigned to look after their own people. The rebellion — and now the deaths of four of them — is a reminder of how hard is to build a disciplined security force to take over from U.S. troops. The executed men are believed to have been victims of al Qaeda in Iraq, whose leader, Abu Moussab al-Zarqawi. has vowed to kill anyone who joins the security forces.

Add this to the latest suicide bomb attack that killed 18 people and wounded more than 30 at a police station in Fallujah and the wonder is that anyone signs up at all.

U.S. and Iraqi forces claim to have killed more than 100 insurgents in the past week. More clashes between U.S. troops and insurgents in Ramadi on Wednesday prompted air strikes that left an apartment building on fire — and no sense that American forces are winning or that the insurgents are losing.

The key to breaking the back of the insurgency lies in forming a government that will be seen as representative of all Iraqis. Parliament, which is supposed to form a government of national unity, met for its first normal business session since it was elected in December but did not address the major issues. The crucial task of selecting a committee to review and amend the constitution was postponed until after a new government is actually formed.

A major stumbling block is the proposal to set up regional authorities. Sunnis, who are in the minority, fear that the Kurds in the north and Shiites who dominate the south, both of which contain most of the country's vast oil reserves, will become powerful enough both economically and politically to split the country into three. That would leave the Sunnis stuck in the middle, with no resources worth mentioning.

Until a government is formed that is seen to represent the interests of all groups in a fair and equitable way, there is little hope of the insurgency being broken.