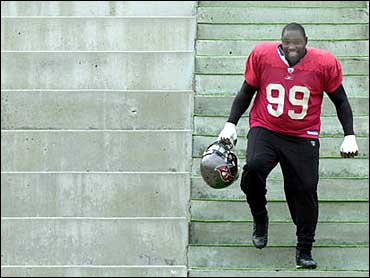 Hey, Super Bowl fans, the Oakland Raiders are not wimps on defense and the Tampa Bay Bucs are not buffoons on offense.

True, neither is ranked at the top of the league the way the Raiders are with the ball and the way the Buccaneers are when the opposition has it. And neither has gotten much credit for lifting its team to a conference title.

"But we've played well," Raiders cornerback Charles Woodson said. "We've been beaten up and we still played well. So we're not concerned about their defense getting all the attention."

Nor are the Bucs offended that they're pretty much ignored while all the recognition goes to Oakland's high-powered attack.

"If we win the Super Bowl, that will change," wide receiver Keyshawn Johnson said. "The Super Bowl puts the stamp and the legacy on what you did in your career. The great players win Super Bowls. The stats don't matter — it's the ring."

Ah, the ring. To win it, the Bucs can't have their offense become bystanders. Same for Oakland's defense.

Tampa Bay ranked 24th in yards gained (27th rushing, 15th passing). The Bucs scored 346 points, but the defense scored five touchdowns, four by NFL defensive player of the year Derrick Brooks, and the special teams had one. The defense also set up a bunch of points by forcing 38 turnovers, including 31 interceptions.

In other words, that all-world D made things far easier for the sometimes-pedestrian offense.

But the Buccaneers have begun to establish an identity offensively, and they've been efficient enough in the playoffs.

"We have attitude," Pro Bowl fullback Mike Alstott said. "We haven't always looked pretty, but we get the job done one way or another. We try to be very physical up front, we have a wide receiver corps that will go downfield and block. They are horses.

"Remember, we have a new offense, a new O line since Jon (Gruden) was hired as our coach. Ask any player in the NFL when you have gone through dramatic changes like we have, to be asked to be perfect in nine months, it can't happen."

Here's what the stars on the Bucs' stingy defense believe can happen: Their teammates on offense will rise to the challenge of winning a championship. All-Pro defensive tackle Warren Sapp doesn't want people separating Tampa's units.

"We've got an inferno going," he said, "and when that three-headed monster — offense, defense, special teams — raises his head, he is impossible to slay."

Oakland's defenders say they are ready for that monster, regardless of how many heads it has. The Raiders have plenty of big names on defense, from All-Pro safety Rod Woodson to cornerback Charles Woodson to linebacker Bill Romanowski to tackle Sam Adams. Rod Woodson, Romanowski and Adams already have won Super Bowls with other teams, so there is no lack of success, experience or leadership on the squad.

The Raiders ranked 11th in yards allowed and a very impressive third against the run, ahead of the Bucs, who were fifth. But Oakland was 23rd against the pass and allowed 304 points, 108 more than the NFC champions.

"They might not get the notoriety of Tampa's defense," Raiders coach Bill Callahan said, "but it is a defense that has improved and continues to make plays. The value of our defense was so important to us down the stretch."

Oakland's defense also has injury concerns, most notably Charles Woodson's leg. Although he made the Pro Bowl, he's had a difficult stretch, particularly in the playoffs.

"We overcame a lot of injuries on that side of the ball," Callahan said. "How we stayed together to do that and play at such a high level is astronomical."

The number of points the Raiders usually put up is astronomical. If the game turns into a shootout, the Bucs are done.

However, if Tampa can establish its tempo when it has the ball, how long will league MVP Rich Gannon and his compatriots get to assert themselves?

Adams, a Super Bowl winner two years ago with Baltimore, says not to count on that happening. Besides, it's not what everyone wants.

"Yeah, we have a solid defense and they are a good offense. But it's not what people are paying to see."

Gannon looked sharp in a crisp 95-minute workout Friday as the Raiders finished their third practice ahead of the game. They were to have a walk-through at Qualcomm Stadium Saturday.

Tampa Bay worked out for less than 30 minutes Friday before their final walk-through Saturday.

Separately, NFL Commissioner Paul Tagliabue said he expects the league's owners to scrap the sudden-death overtime format before next season. There were a record 25 overtimes this season and there's a movement to allow both teams to have at least one possession in overtime.