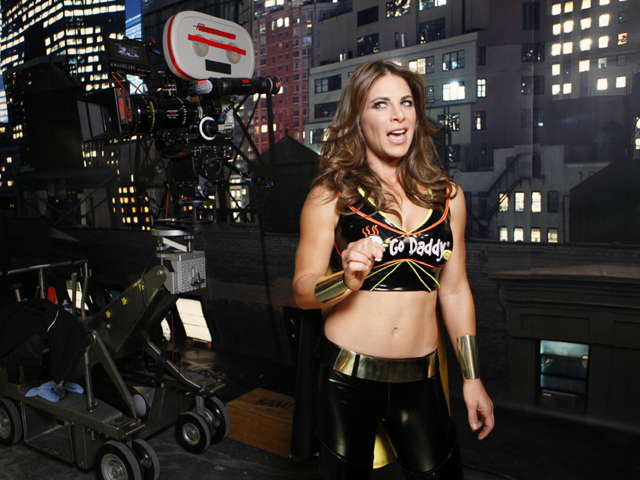 (CBS/AP) How can you grab the attention of the more than 100 million people who are expected to tune into Super Bowl XLV on Sunday?

Celebrity fitness trainer Jillian Michaels and race car driver Danica Patrick in leather pants; an unusual combo of Bieber fever and Ozzy's flair for darkness; and talking chimps and babies, not to mention one of the best marketing tools around, Kim Kardashian.

Top-notch advertisers hope to score touch-downs with their $3 million-plus investments by thinking outside the box.

So, which commercials are bound to get people chatting by the water cooler at work on Monday ?

BEST BUY: Odd couple Justin Bieber and Ozzy Osbourne will star in the electronics seller's Super Bowl debut in the third quarter . The ad  promotes a new program where Best Buy will buy back electronics when customers decide to upgrade. The ad's still under wraps, but pairing the teen idol and the prince of darkness certainly fires the imagination.

AUDI: One of at least nine automakers advertising during the Super Bowl, Audi's ad during the first break after kickoff is targeted at younger buyers. It shows people escaping from a posh prison to illustrate the difference between "old luxury" and Audi.

CAREERBUILDER.COM: The mocking office chimps that show why viewers might want to look for a new job return in a third-quarter ad.

GODADDY.COM: Promotes the .co alternative to the .com Web domain in an ad that shows celebrity fitness trainer Jillian Michaels and race car driver Danica Patrick seemingly naked and directs viewers to its Web site to see the ending.

PEPSI: PepsiCo teamed with Eminem on a first-quarter, stop-motion animated spot that uses a puppet with Eminem's likeness to promote Lipton Brisk. Also has three ads each for its Pepsi MAX and Doritos, all created by fans.

SNICKERS: Comedians Roseanne Barr and Richard Lewis star in a second-quarter ad. It's an encore to last year's hit commercial that saw Betty White take a vicious tackle on a football field.

E-TRADE: The online investing site brings back the popular talking babies it introduced in 2008 in a third-quarter ad.

ANHEUSER-BUSCH: The brewer will promote an imported brand, Stella Artois, for the first time on the Super Bowl. That ad stars actor Oscar-winning actor Adrien Brody as a 1960s jazz club singer. (If you're looking forward to Bud Light's legendary humor, it has three commercials coming, too, which it has teased on Facebook.)

SKECHERS: Kim Kardashian "will break someone's heart," the shoe maker says, in an ad for toning shoes near the two-minute warning.

VOLKSWAGEN: The automaker's trademark whimsy permeates an ad in which a Darth Vader-costumed boy tries using The Force on household objects and his father's Passat.