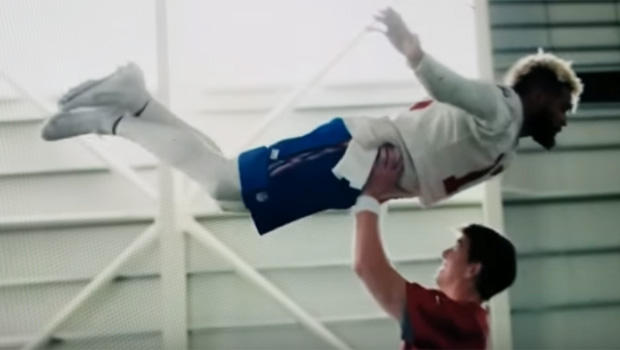 NEW YORK -- The Giants won the Super Bowl. Not really, but Eli Manning and Odell Beckham Jr. stole the show with an NFL ad in which the two perform the choreography from the movie "Dirty Dancing" - complete with the iconic lift done by Patrick Swayze and Jennifer Grey.

The third-quarter ad was an instant social media hit. Twitter users said they had the time of their life.

Bret Werner, president of MWW public relations, said "the NFL spot on "Dirty Dancing" was vintage. The Odell and Eli connection scored off the field."

This year's ads ran the gamut from tame humor to tame messages about social causes.

After a divisive year, advertisers during the Big Game worked overtime to win over audiences with messages that entertained and strove not to offend. The slapstick humor and sexual innuendo that used to be commonplace during Super Bowl ad breaks were nowhere in sight.

Instead, Budweiser, as always the largest advertiser during the game, eschewed the usual puppies and Clydesdales to showcase employees that send water to places in need. Verizon showed people thanking first responders who saved them. And Tide tried to make people laugh (and perhaps forget about its Tide Pod problem) with a humorous series of ads that starred "Stranger Things'" actor David Harbour.

"This is a year where people are feeling a little frayed around the edges because the divisive political environment on both sides," said Kelly O'Keefe, a professor at Virginia Commonwealth University's Brandcenter. "They want to feel like there's something still good in the world."

While the Philadelphia Eagles bested the New England Patriots in a nailbiter on the field, advertisers were fighting a similar battle to win over the hearts and minds of viewers. It's the largest live stage for advertising all year, so advertisers brought their A-game.

Tide took a novel approach with ads each quarter that poked fun at typical Super Bowl ads. Harbour popped up in familiar-looking ads that appear to be about different products: a car, an insurance company, jewelry and Old Spice (another P&G product). The twist? They're really all Tide ads, because there are no stains on anyone's clothing.

Tame comedy like the Tide ad was a theme throughout the night. In a year that saw the #MeToo movement shine a spotlight on sexual harassment, the vast majority of ads sill starred men but there weren't any that focused on scantily-clad women or sexual innuendo, save for an awkwardly dancing - and fully dressed - woman in a Diet Coke ad.

Comedian Keegan Michael-Key cut through complex jargon to put things plainly in a humorous ad for Rocket Mortgage by Quicken Loans. When a restaurant patron is confused by what a "beef-protein gluten-free pate" is, he explains: "It's a burrito, filled with plants pretending to be meat."

"There's a reason so many marketers are using celebrity combined with comedy - because it breaks through the clutter, delivers the message and gets buzz," said Aaron Shapiro, CEO of ad agency Huge.

An ad for Blacture, rapper Pras' new media platform, was one of the few ads to make an overtly political statement. It showed an African-American man standing alone on stage with tape over his mouth and a blindfold on his eyes. "Blacture. Be celebrated. Not Tolerated," text on the screen read. And T-Mobile's ad showed babies and enlisted Kerry Washington for a voiceover that talked about equality.

"The (T-Mobile) message is terrific but all the way through, if you asked consumers who the ad is for, nobody would know," said Kimberly Whitler, marketing professor at the University of Virginia.

That kind of attempt to connect brands to social causes was a big theme of the night. Charles Taylor, a marketing professor at Villanova University, said a fifth of all Super Bowl ads featured causes, compared with just 6 percent last year.

Toyota kicked things off by depicting the story of Lauren Woolstencroft, a Paraolympic skier who was born missing her left arm below the elbow as well as both legs below the knees, to promote its Paralympic sponsorship.

Budweiser showcased employees from its Cartersville, Georgia, brewery as they canned water to send to places in need like Puerto Rico and California.

Hyundai showcased its donations to fight pediatric cancer by bringing real Hyundai owners into a room during the pre-game Super Bowl festivities and letting them meet cancer survivors. Hyundai donates each time someone buys one of its cars.

"There's a lot of research that says millennials really like it when brands link themselves to causes," said Taylor. "It's just refreshing for a lot of people to see these unifying types of messages by the advertiser."

But advertisers can stumble in these efforts when the connection seems tenuous. There was some negative reaction when Fiat Chrysler's Ram trucks ad featured a speech by Martin Luther King, Jr. The commercial, timed to the 50th anniversary of the speech, showed people doing good deeds like giving out food to the needy and rescuing a boy from a fire.

"Everyone was offended," said Zach Mann, who watched the game in Venice, California, with a group of 15 thirtysomethings. "It seems insensitive. We know it's Black History Month, but using an American hero to sell a Dodge was off-putting." (Ram trucks are no longer affiliated with the Dodge brand.)

Instead, it was the humorous ads like the Tide spots that won that group over.

"Everyone seems to be moving into more comedy, quirky, unique (ideas), which my friends and I all are enjoying way more" than past years, Mann said. "I think we all need more laughter these days."