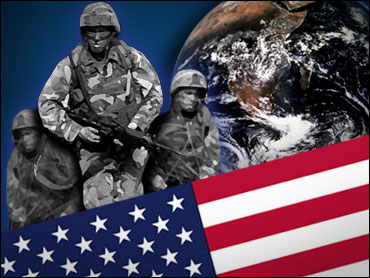 This column was written by Tom Engelhardt.

Pick up the paper any day and you'll find tiny straws in the wind (or headlines inside the fold) reflecting the seeping away of American power. The President of the planet's "sole superpower" and his top diplomats and commanders have been denouncing Iran for months as the evil hand behind American disaster in Iraq as well as Afghanistan.

So imagine, when President Hamid Karzai of Afghanistan arrived in Washington a couple of weeks back and promptly described Iran as "a helper and a solution" for his country, even as President Bush insisted in his presence: "I would be very cautious about whether or not the Iranian influence in Afghanistan is a positive force." At almost the same moment, Iraq's embattled Prime Minister Nouri al-Maliki paid an official visit to Iran, undoubtedly looking for support in case the U.S. turned on his government. Maliki "held hands" with Iranian President Mahmoud Ahmadinejad, met with Supreme Leader Ayatollah Ali Khameini, and called for cooperation. In response, all President Bush could do was issue a vague threat: "I will have to have a heart to heart with my friend, the prime minister, because I don't believe [the Iranians] are constructive.... My message to him is, when we catch you playing a non-constructive role, there will be a price to pay." (Later, a National Security Council spokesman had to offer a correction, insisting the threat was aimed only at Iran, not Maliki.) Then, to add insult to injury, just a week after Bush and Karzai met in Washington, Ahmadinejad headed for Kabul with a high-ranking Iranian delegation to pay his respects to the Afghan president "in open defiance of Washington's wishes." Think slap in the puss.

What made this little regional diplomatic dance all the more curious was the fact that Karzai and Maliki are such weak (and weakening) American-backed leaders — Maliki of a government in chaos whose purview hardly extends beyond the heavily fortified Green Zone in Baghdad, and Karzai, sometimes dubbed the "mayor of Kabul," as head of a government visibly losing control over even the modest areas it had ruled. In another age, each would have been dubbed an American "puppet" and yet, here they were, defying an American president in search of support from a hated regional power on whose curbing Bush has staked what's left of his presidency.

Meanwhile, the first joint Sino-Russian "military exercise" on Russian soil (witnessed by Chinese President Hu Jintao and Russian President Vladimir Putin) had barely ended when Putin announced late last week, not from Russia but from the former Central Asian soviet socialist republic of Kazakhstan, that "regular long-range air patrols that ended after the Soviet Union collapsed" would now be resumed — and not just over Russian air space either. The planes in these patrols are nuclear-armed and "capable of striking targets deep inside the United States." Think of this as one way in which the Russian President, thoroughly irritated with the Bush administration's decision to implant elements of an American anti-missile system in Poland and the Czech Republic, was using military symbolism to reassert his country's right to Great Power status — a status earned in recent years, thanks to its enormous energy reserves. All a State Department official could say in response was: "If Russia feels as though they want to take some of these old aircraft out of mothballs and get them flying again, that's their decision."

Meanwhile, halfway across the globe, Venezuelan President Hugo Chavez's government was reportedly on the verge of announcing a new deal with Putin's Russia. Having already purchased Russian jets, helicopters, and whole plants to build Kalashnikov assault rifles (in the face of an embargo on American arms), it would now buy 5,000 advanced Dragunov sniper rifles. Again the deploring sounds from Washington were remarkably mild, though the frustration level is obviously high.

When it comes to discovering regular signs like these of the visible decline of American global power, you can actually do this exercise yourself. Just keep an eye on your daily paper — or start by checking out the latest sweeping piece, "America on the Downward Slope," by Middle Eastern expert Dilip Hiro, most recently author of Blood of the Earth, The Battle for the World's Vanishing Oil Resources. "When viewed globally and in the great stretch of history," he concludes, "the notion of American exceptionalism that drove the neoconservatives to proclaim the Project for the New American Century in the late 20th century — adopted so wholeheartedly by the Bush administration in this one — is nothing new.... No superpower in modern times has maintained its supremacy for more than several generations. And, however exceptional its leaders may have thought themselves, the United States, already clearly past its zenith, has no chance of becoming an exception to this age-old pattern of history."

In 2002, the Bush administration issued its National Security Strategy of the United States of America, a document of ultimate hubris in which its strategists essentially claimed that the U.S. was planning to remain the global superpower for an eternity. They were going to feed the Pentagon so much money that it would be bulked up into the distant future — and so, capable of suppressing any potential superpower or bloc of powers that might emerge. How long ago that seems. With the black hole of Iraq sucking all Bush administration efforts into its vortex, much of the globe has, it appears, been quietly released to enhance its power at the expense of the sole superpower, now sliding down that slippery slope.
By Tom Engelhardt
Reprinted with permission from the The Nation