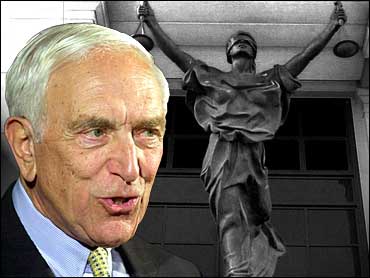 
If the justices of the Supreme Court were looking for an escape route away from the latest election typhoon heading their way, the New Jersey Democrats gave them just enough direction.

In a brief filed Friday that was long on logic and short on hyperbole, the Democrats offered Justice David Souter and his colleagues a legal and factual roadmap leading away from the Jersey Senate ballot spat.

And on Monday, the Court revealed that it had followed those directions; the Republicans will not get their day in court over New Jersey's elections laws the way they did nearly two years ago over Florida's election laws. The conservative Supreme Court has given a round to the Democrats, who figure to hold onto that Senate seat and, perhaps, the hotly-contested Senate as well.

There is nothing to analyze about the Supreme Court's action Monday. The Court, without comment, simply declined to decide the Republican appeal on its merits -- a legal housecleaning procedure, by the way, the Court repeated nearly 2,000 other times on Monday at the start of its 2002-2003 term. So we may never know precisely what the Justices were thinking about before they instructed Justice Souter, who handles emergency applications from the 3rd Circuit, to put the appeal on ice.

But the practical effect of the non-decision decision essentially kills the GOP's hopes of blocking New Jersey from replacing Sen. Robert Torricelli's name with Frank Lautenberg's on the Nov. 5 election ballot.

Whatever legal options are left are so remote and would take so much time to evolve that they are, or ought to be, political non-starters. After all, if Al Gore couldn't for political reasons continue his legal fight after the Supreme Court issued its Florida Recount ruling on December 12, 2000, why would anyone think the Republicans could continue to fight this fight now with a straight political face? About the only real legal choice here for the Republicans is to wait and see how the election plays out and then perhaps explore the option of mounting a post-election challenged based, perhaps, on ballot confusion or the way the old and new ballots were handled overseas and by the military.

And that is just one of the many valid points raised by the Democrats in their filing Friday; a document that not only had to buttress a shaky New Jersey Supreme Court ruling earlier in the week but also had to convince the Justices why this case was different from the Florida case.

"There is no reasonable argument that (Republican candidate Douglas) Forrester is injured," Democrat lawyers argued, "while he claims that the voters `risk effective disenfranchisement' every one of them remains able to vote for him, regardless of who else is on the ballot."

If Forrester loses, in other words, and if there is a widespread showing that New Jersey residents were confused by the ballot switch, than perhaps after the election Forrester and his supporters might have a reason to complain. Except that there isn't likely to be a lot of voter confusion.

Why? Because only a small percentage of New Jersey voters actually already received the old, Torricelli ballots. That means that the only ballot a vast majority of voters in the state will see will be the new, Lautenberg ballot and that, in turn, means that it will be hard for the GOP to later argue that this switch so tainted the election that post-voting judicial relief would be required or advisable.

As the Democrats told the justices, "eight counties had printed all or some (of the old, Torricelli) ballots while ten others had not commenced printing." Meanwhile, the brief continued, "fourteen of New Jersey's twenty-one counties had not mailed any of their approved absentee ballots. Less than ten percent of approved absentee ballots state-wide had been mailed. Eighty-three percent of overseas ballots had not been sent. Of the overseas ballots that were sent, four ballots, which accounts for only two-hundredths of a percent, had been returned."

It's hard to read those figures, provided by county clerks all over New Jersey, and not believe the state's attorney general when he said last week that the election "train" was not so far from the station that it could not be brought back and reconfigured to reflect the new Democratic candidate. And it's hard to believe that the Justices, whatever they may have felt personally about the way the New Jersey Supreme Court reviewed state election law, didn't also figure there was plenty of time to fix the problem and still have a fair election with plenty of voter choice.

To bolster the New Jersey court ruling, and to give the justices plenty of other reasons to stay uninvolved, the Democrats also cited examples of other states -- Texas, Maryland and Pennslyvania were identified -- where ballot changes may be made closer to an election than the Republicans wanted. And then the Dems took head on the Supreme Court's ruling in Bush v. Gore, the decision which gave the presidency to George Bush and which the New Jersey Republicans had focused heavily upon in their appeal brief filed earlier last week. The election recount ruling, the Democrats argued, did not "federalize any state court interpretation of state election law," as the GOP had argued, but instead relied "only upon the problem of equal protection in election processes."

So it looks like the Republicans have lost this legal battle and the Democrats have won it. Meanwhile, it also looks like the battle for the legacy of the Bush v. Gore ruling is well under way as well. The Supreme Court itself declined Monday to opine about the scope of that controversial decision -- perhaps they declined to take the case just to avoid doing so -- but it's clear from this dustup that Bush v. Gore won't be an automatic winner for the GOP or an automatic loser for the Democratic Party.