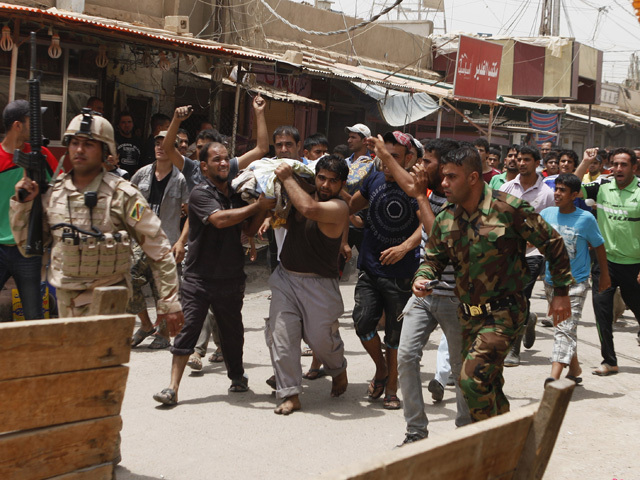 (AP) BAGHDAD - A half-year after the U.S. military left Iraq, dire predictions seem to be coming true: The country is mired in violence and the government is on the verge of collapsing. With no relief in sight, there's growing talk of Iraq as a failed state as al Qaeda's local wing staged near daily attacks that killed at least 234 people in June.

Iraq no longer suffers widespread retaliatory killings between Sunni and Shiite extremists that brought the country to the brink of civil war. But the spike in violence heightens fears that Iraq could limp along for years as an unstable and dangerous country.

June was the second-deadliest month since U.S. troops withdrew from Iraq in mid-December as insurgents exploited the political struggles between the country's ethnic and sectarian factions. More significant than the numbers was the fact that insurgents appeared able to sustain the level of violence over a longer period than usual. There was a major deadly bombing or shooting rampage almost every three days, many targeting Shiite pilgrims.

The violence has brought the weakness of Iraq's security apparatus into sharp focus even as deepening political divisions dim the prospects that the country will emerge as a stable democracy after decades of war and dictatorship.

"The state is almost paralyzed and dysfunctional due to political feuds. In such circumstances, the security forces also will be paralyzed and the insurgents groups are making use of this chaos," Haider al-Saadi, the Shiite owner of internet cafe in eastern Baghdad, said Saturday. "I do not think that al Qaeda is getting any stronger — it is the state that is getting weaker."

The situation deteriorated shortly after American troops left Iraq on Dec. 18, following failed negotiations to stay beyond a year-end withdrawal deadline that was cemented in a 2008 security agreement.

The next day Prime Minister Nouri al-Maliki's government issued terror charges against Vice President Tariq al-Hashemi, one of Iraq's highest-ranking Sunnis, who fled Baghdad and remains on the lam. Sunni lawmakers briefly boycotted parliament and al-Maliki's cabinet in protest. By spring, leaders of the self-ruled Kurdish northern region joined the Sunni-dominated Iraqiya political coalition against al-Maliki, whom they accused of refusing to share power.

And last week, in the first major defection by an influential Shiite leader, anti-American cleric Muqtada al-Sadr said he would direct his followers to join efforts to oust al-Maliki if a power-sharing agreement is not reached.

Al-Maliki, who won a second term in 2010, followed with a threat to call for early elections that would dissolve parliament if government infighting does not stop.

In calling for an early election, al-Maliki is betting he would win with enough widespread support to gain undisputed power. His political coalition fell short of winning the most seats in parliament in 2010 elections and back-room dealing among political parties delayed a new government from taking over for nine months.

"The insurgents are making use of the political differences in the country, and the recent attacks are the result of this political strife," al-Dabbagh said.

Violence has been steady across Iraq so far this year, but the levels of attacks in June soared beyond the occasional, if spectacular, wave of bombings that is al- Qaida's usual pattern. Victims mostly have been Shiite pilgrims, government officials and security forces — three of al Qaeda's favorite targets.

Al Qaeda front group the Islamic State of Iraq claimed responsibility for a June 13 wave of nearly two dozen bombings nationwide that killed 72 Iraqis. The coordination, sophistication and targets of several other attacks also bore the hallmarks of the terror network.

Iraqi and U.S. intelligence officials long have said that al Qaeda's resources in Iraq — including money, weapons and a stable of suicide bombers — have dwindled to the point where the insurgent group can only carry off a few attacks each month.

Many experts believe the turmoil in neighboring Syria is stoking the violence, saying the success of the Sunni-led opposition against President Bashar Assad's regime is emboldening Iraqi Sunnis to attack government targets.

"As the edifice in Syria weakens, the more space for violence is going spill over to the Sunni areas in Iraq," said Kamran Bokhari, a Canadian-based expert on Mideast issues for the global intelligence company Statfor.

Some analysts believe Iraq is turning into a failed state. This month, the U.S.-based Fund for Peace ranked Iraq No. 9 on its annual Top Ten list of failed states worldwide. The nonpartisan research group ranked 178 nations and blamed the persistent security problems in Iraq on the inability to overcome long-standing ethnic and sectarian tensions.

Despite the continued bombings and other attacks, Iraqis have not returned to the sectarian warfare that killed tens of thousands of people as violence peaked in 2006-2007. Shiite militias have shown restraint even as a spate of bombings targeted Shiite pilgrims, shrines and government leaders.

And as al-Sadr, an anti-U.S. cleric whose militias were responsible for some of the bloodiest attacks of the war, seeks to secure his status as a major political player in Iraq, it's doubtful he will unleash his followers in widespread violence that would undermine his credibility across the mostly-Sunni Arab world.

Even al-Maliki's opponents speak only of ousting him in a parliamentary vote, not by force.

Underscoring the continued dangers, however, the month ended with a pair of bombings Saturday in the northern, Sunni-dominated Nivevah province, killing two soldiers on separate security patrols, local officials said.

Many Iraqis lament the withdrawal of U.S. forces, saying it was premature.

"The U.S. pullout was a mistake because the country is still in need for their intelligence and military capabilities," said Mohammed Salam, a Sunni government employee in Baghdad. "The Iraqi government should have kept some several thousands of U.S. troops in order to help Iraq forces maintain a reasonable level of security."

The international community spent billions of dollars to stabilize Iraq since the 2003 U.S.-led invasion that ousted Saddam Hussein. Nearly 4,500 U.S. troops were killed during the war.

But the U.S. currently has limited influence in Baghdad: A June 14 statement by the top national security adviser to Vice President Joe Biden that urged Iraqi officials to "alleviate current tensions in order to refocus energy on critical state-building challenges" produced few, if any, signs of progress.

Nor do most Iraqis expect any.

"I think Iraq will see worse days in the future if the politicians continue their destructive feuds and keep following their personal ambitions," Salam said.