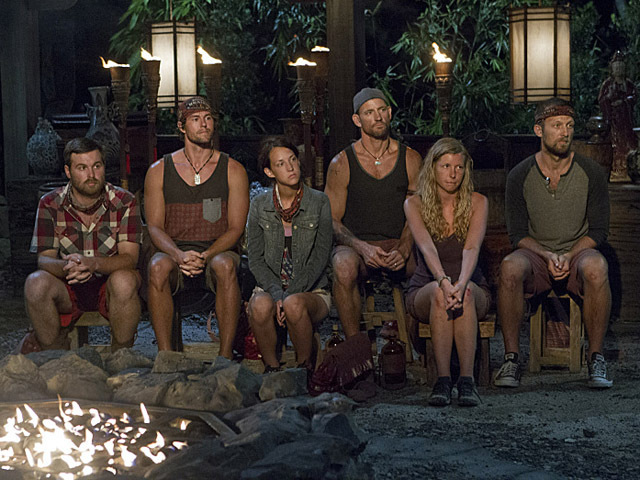 Last week on "Survivor: Blood vs. Water," Brad Culpepper organized the ouster of a member of his own alliance. This week, he became a target himself.

First, we go to Redemption Island, where Candice is upset to find her husband, John, has joined her there. The next day at the duel, she calls Brad a "child" and accuses him of hushing women in the camp. John backs her up, telling everyone not to trust him.

For the duel, John, Candice and Marissa had to move across a ladder bridge maneuvering a key through a rope, then use the key to open a bag of puzzle pieces. The last person to complete the puzzle was Marissa, and she was subsequently eliminated from the game.

As the winner, John had a clue to the hidden immunity idol to give away. Candice tells him to give it to Monica, and he does, knowing it will put a target on her back. Brad then tells Monica to burn it, which she does.

Back at camp, Brad is already plotting for Caleb to be ousted next, on the thinking that he doesn't have a partner left in the game anymore (thanks to Colton quitting last week). While he goes fishing, the other guys discuss whether it would be good to keep Brad around until the merge as that would take the heat off them.

Tyson admits he's playing up his shoulder in injury to get out of doing work around camp. He and Gervase also form an alliance (one that involves sneaking off to drink coconut milk together) because their loved ones are both out of the game.

For the immunity challenge, teams have to paddle out and get five crates. They then have to build stairs with the crates, solve a puzzle, get a key and unlock a flag. Galang gets off to a good start, but Tadhana catches up after two of their crates fall in the water. The newbies still had a small lead heading into the final stretch of the challenge, but lost when Laura M. again beat her daughter Ciera at the puzzle stage. Galang wins again, leaving Tadhana 0-4 in challenges.

"Unbelievable. We haven't won yet. I mean, we suck. Today we lost to a one armed dude and three moms. That's brutal," Hayden laments after it's over.

Brad tells Katie and Ciera that the vote should be for Caleb, while the other men in his alliance talk about voting out Ciera.

At tribal council, Brad calls out Ciera for being bad at puzzles. Then, host Jeff Probst asks him if it's good strategy to vote out someone without a loved one because there's no one left on the other tribe to be mad, and Brad agrees. This wakes Caleb up.

"You campaigned against me today," he says, then drops a major blindside. He's not voting for Ciera, he announces to everyone. He's going to vote for Brad, and the girls and the guys can do what they want.

The vote happens, and it's a tie -- three votes for Brad, three for Ciera. There's a revote, and with Vytas switching from Ciera to Brad, he becomes the next person sent to Redemption Island.

Tell us: Were you surprised by Caleb's bold move (and that it worked)?