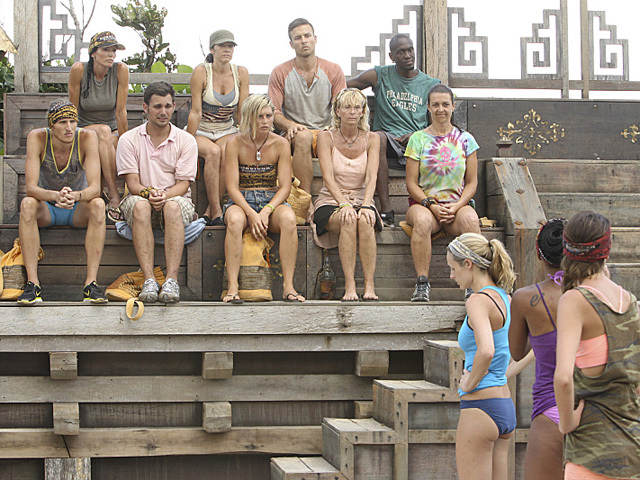 Viewers must have been feeling a sense of deja vu while watching this week's "Survivor: Blood vs. Water."

Before any challenges could take place on Wednesday's episode, someone was already heading home. Host Jeff Probst and the castaways were thrown for a loop when Colton tearfully announced he didn't want to play the game anymore.

"I don't want to be here anymore at all," he said, telling everyone he wanted to quit. "That may be the best move for me."

This marks the second time Colton has pulled himself from the game, which Probst called him out on. "What is it that has happened on your tribe that is forcing you to quit, for what now I can confirm for myself is a second time? The first time you feigned an appendicitis. Turns out you didn't have it. You want to own that one now?"

Colton mumbles something about having a bacterial infection, but Probst isn't done. "We brought a quitter back and we got a quitter again," Probst said, before telling the now two-time quitter, "You can keep your buff. I won't give it the honor of throwing that in the urn. We'll keep that reserved for people that compete." Ouch.

After that, the attention was brought back to the Redemption Island duel between Marissa, Candice and Rachel, whom Tadhana voted out last week in hopes her husband, Tyson, would take her place. It almost worked -- "It's up to you," he told her, but she told him to stay.

For their challenge, the three women must line up blocks on a set of zig-zag planks rigged with trip bars. Once the blocks were lined up, they had to be knocked down, dominoes-style, setting off a reaction that released a ball and smashed a plate. Candice finishes quickly and wins her second consecutive Redemption Island duel (receiving another clue to the location of an immunity idol, which she again gives to John), but the other women struggle with the heat and keeping the blocks steady. It's neck-and-neck, but Marissa finishes first. That means Rachel's out of the game.

This week's immunity challenge had players facing off, sumo-style, with giant pads. Knocking the competitor off the platform and into the water scores a point for the winner's tribe. First tribe to score five points won and would receive a bevy of comfort items -- pillows, mosquito nets, and the like.

Highlights included mother-daughter match-ups between Tina and Katie and Laura and Ciera, with both moms scoring victories. Brothers Aras and Vytas also faced off, with Aras getting the win.

When it was over, Galang won the challenge, sending Tadhana to tribal council for the third week in a row. Brad decides to break up his dudes alliance and vote out John, fearing that if his wife, Candice, makes it back into the game she'd hold sway over his vote. So he tells the other guys they should all vote off John while he votes for Ciera, because then if something goes wrong he can bring John back into the alliance. It makes him look untrustworthy, but they go with it and John is sent to Redemption Island.

Tell us: Were you surprised Colton quit (again)? Were you sad to see Rachel go?