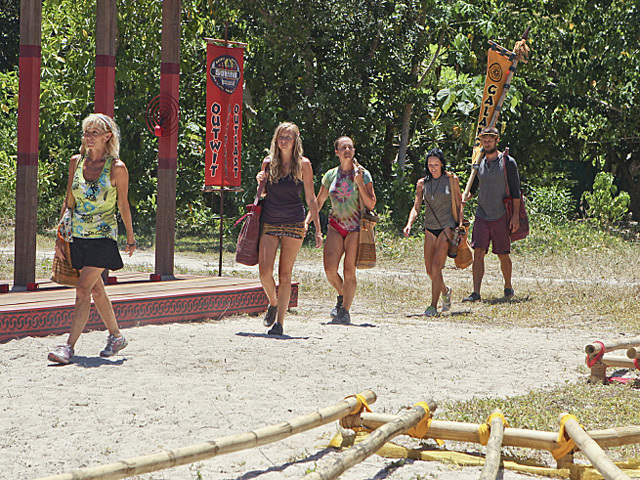 Loose lips sink ships, no good deed goes unpunished -- both of those phrases could be apply to Laura B. following Wednesday's episode of "Survivor: Blood vs. Water."

It came from a place of kindness -- not wanting to blindeside another tribe member -- but her decision to spill secrets decided on by her alliance ultimately cost her.

Before all that, though, it was back to Redemption Island for another duel. Kat, sent there last week, is in tears and says she'd let boyfriend Hayden take her place.

"I would switch," she tells Jeff Probst. "Because I'm afraid that I won't do well in this duel. Because it's a puzzle and I can't even spell."

Hayden, however, plays with his head and not his heart, and convinces her it's the best thing for both of them if she stays put. "Who has the better shot to win the game?" he asks her. "You know you do," she responds.

So she stays to duel with Laura M. and John. This week, they had to untie a jumble of cords to free a machete, use that to chop a rope that released a bag of puzzle pieces, and then assemble a fire-shaped 3D puzzle. John finishes first, so it's between the two women for second place. Laura looks over at John's completed puzzle to help her finish, and Kat refuses to do the same because "it's cheating." Cheating or not, Laura finishes first and Kat is eliminated from the game.

Once again, John gives the clue to the hidden immunity idol to Monica, who again throws it in the fire.

Later, Hayden admits regret that he didn't switch with Kat, but also says with her gone he can now play for himself and be more cutthroat. Aras goes off to meditate, which gives the rest of his tribe some time to work out how to get rid of him or his brother before the merge.

At the Galang camp, Vytas has made himself very likable -- so likeable, in fact, that Tina proclaims she'd be happy if he and Katie got together because she's "ready for grandbabies." But despite that, all the women agree that Vytas has to be the next one to go -- reasoning, as Tyson did at Tadhana, that the brothers have to be split up. Laura B. gets emotional about it, but says she'll go along with the group.

For the immunity challenge, four members of each tribe are chained together and have to maneuver over obstacles to collect bags. A fifth member then must construct bolas from what's in those bags, and land three of those on a target. Tyson finishes just before Tina and secures Tadhana another victory and a fried chicken dinner as their reward.

After the challenge, Galang is back at camp awaiting that night's tribal council. Earlier, all the women agreed to vote out Vytas, so everything should be settled, right? Wrong. Laura cries and blabs to Vytas, in front of everyone else on her tribe, that they all decided he'll be the one to go. She says she told him so he wouldn't be blindsided and everyone can have "a good afternoon." "Do you think that makes me want to have a good afternoon?" he asks back.

And, with that, the target is officially off Vytas' back and firmly on Laura's. The rest of the women are not pleased that she informed Vytas of his impending departure without consulting them, and start labeling her as unpredictable and not trustworthy. Tina hints to Vytas that he might not be leaving just yet.

Despite all the reasons they gave earlier about why Vytas should be voted out, it's Laura who receives the most votes and is sent to Redemption Island.

Tell us: Did Galang make the right decision, voting out Laura? Or should they have stuck with their plan and ousted Vytas?