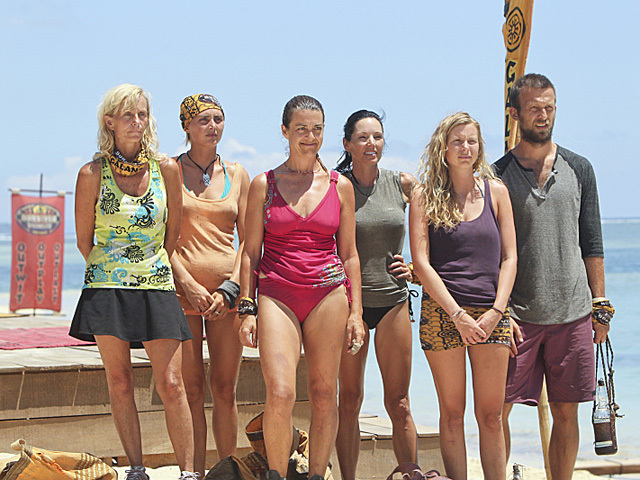 It wasn't time for the merge just yet, but there was still a tribal shakeup on Wednesday's "Survivor: Blood vs. Water."

After last week's tribal council (when Laura M. was sent to Redemption Island), Aras is worried about whether he'll be targeted as his group's ringleader and singled out next for elimination. He's got good reason -- the next morning, Tyson tells Gervase now might be the time to eliminate Aras, before he can align with his brother, Vytas, at the merge.

On Redemption Island, John, Brad and Laura step out. Ciera tells Jeff Probst she's had a weird feeling all day and was not surprised to see her mother in the arena. Laura refuses to let her daughter take her place.

For the Duel, the three competitors had to race across a balance beam and untie bags containing numbered tiled, which then had to be set out in order. Laura makes quick work of it and finishes first, but Brad and John both have trouble balancing and are neck-and-neck for second. It's close, but John wins and Brad is sent packing.

Laura chooses to give the clue to the hidden immunity idol to Vytas, who immediately threw it into the fire as to not become a target.

Then, it's switching time. Everyone has to randomly draw new buffs to determine who's on their tribes. The results are interesting -- Tyson, Gervase and Aras move to Tadhana and Vytas and Katie move to Galang.

That means the new tribes are: Gervase, Tyson, Aras, Caleb, Hayden and Ciera on Tadhana, and Tina, Katie, Monica, Kat, Laura B. and Vytas on Galang. That's one woman and five men on one tribe, while the other has five women and one man.

At the newly-reshuffled Tadhana camp, Caleb is wary of the new guys but Hayden and Ciera proceed to start telling them everything, including what they know about the hidden immunity idol clues. As Tyson says, "Stupid will be stupid." He's also decided to "eat and steal as much as I can from this tribe." When he's not stealing food, Tyson's also trying to make Aras look like a bossy bad guy, so the newbies will see him as someone to target.

Over at new Galang, Tina is thrilled to be on the same tribe as daughter Katie. "I've been playing water and now I can play blood," she says. Vytas, as the only guy and new to the tribe, feels like he's in trouble, and appeals to everyone's sympathies by opening up about his past heroin addiction and jail time. He's also helped, inadvertently, by Kat, who is unnerved by the amount of talking and strategizing Monica does.

For the Immunity Challenge, pairs from each team had to swim out to a cage in the ocean, and retrieve a fish trap from it. Once pairs have brought back three fish traps, they had to use the pieces inside to complete a vertical puzzle. The winning tribe gets immunity and a picnic lunch.

Listening to instructions is helpful in life and "Survivor" challenges, but Laura B. and Tina somehow didn't get the memo. They swim out to the cage for Galang, open the gate and then swim back without getting the fish trap. That gives Tadhana a huge lead, but Galang makes up time during the puzzle portion of the challenge. Galang thinks twice that they've finished the puzzle and start celebrating, only to be told by Probst that it's wrong. Tadhana gets it right and wins.

Back at camp, Tina apologizes for her role in their loss, but all signs point to Vytas getting eliminated at tribal council. That is, until Kat's worrying gets the best of her and she goes to Tina and suggests giving Monica the boot. Tina then promptly turns around and rats her out to Monica. When Monica confronts Kat about bringing her name up, she denies it, and now Monica is gunning for votes to send Kat out.

At tribal council, Kat admits she and Monica aren't getting along but begs her tribe not to write her name down. Vytas stirs the pot (and keeps himself out of the line of fire) by emphasizing Kat's mistakes with loyalties, and tells the women it's up to them if they want to trust him. "I've heard stories about her not having people's backs," Vytas says, adding, "It sucks to make mistakes, but I haven't."

Kat votes for Vytas, but everyone else votes for her, and she's off to face John and Laura M. on Redemption Island.

Tell us: Did Galang make the right choice to oust Kat and not Vytas?