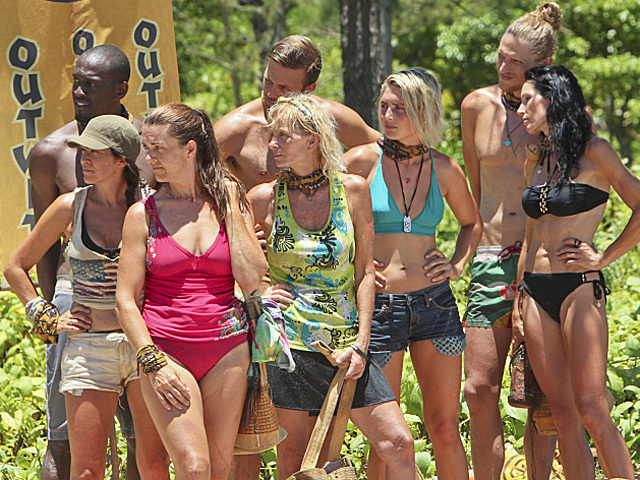 "Survivor: Blood vs. Water" picked up Wednesday with the fallout from Caleb's big move last week, which shook up his tribe and sent Brad Culpepper to Redemption Island.

Monica was in tears upon seeing her husband had been voted out. "You want me to take your spot?" she asked. "You're never gonna take my spot. I'm gonna battle. I'll come back," he promised her.

For the Redemption Island duel, Brad, Candice and John had to take apart a crate and use the wooden slats to build a bridge. Once that was done, they had to take apart the bridge and use some of those pieces to complete a puzzle. Candice started out with a big lead but fell behind before she finished the bridge. John finished first, and it was neck-and-neck between the other two before Brad pulled ahead and won.

As the winner, John gets a clue to the location of the hidden immunity idol. Like last time, he gives it to Monica. And also like last time, Brad tells her to chuck it in the fire and she does.

Back at camp, Caleb is feeling pretty good following last week's tribal council. ""Do I feel powerful now? I think the word I've heard is 'big kahunas,'" he tells the cameras. Hayden and Vytas aren't sure what that means for the guys' alliance and if they can trust Caleb now.

The immunity challenge this week involved water slides and ring toss. One person from each team had to go down the slide, grab a ring and get it onto a post to get a point, and the first tribe to five points would win immunity and a choice of either steaks or fishing gear. Laura B., Laura M. and Monica have to sit out for Galang to make the teams even, and the latter two are overheard complaining about not being able to participate.

For the first time this season, Tadhana scores a victory. They choose immediate gratification (steaks) over long-term gain (fishing gear), and don't have to vote anyone out that night.

Galang now has to prepare to send their first competitor to Redemption Island. Laura B. (Rupert's wife, who ended up on the returnees' tribe after he switched with her on Day 1) assumes she'll be targeted since she's an outsider, and tries to stir the pot by telling Kat and Tina that Laura M. and Monica were mad about sitting out the challenge. The tribe sees right through it, and it looks like everyone's in agreement about voting her out.

But then, Aras decides to change things up. Everyone's uncomfortable with Laura B., he reasons, but just because that's the easy vote doesn't mean it's the right one. He tells Tyson that Laura M. should be voted out instead, in the hopes she'll beat Brad on Redemption Island and send him packing for good and cement Monica's loyalty to their alliance.

At tribal council, it comes down to the two Lauras, but Aras' plan prevails and Laura M. is sent to Redemption Island.

Tell us: Do you think Aras' plan was a smart one?