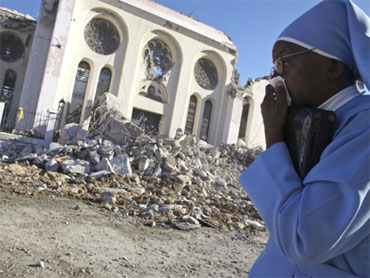 Hundreds gathered for the funeral of the archbishop of Haiti's stricken capital on Saturday, a rare formal ceremony that captured the collective mourning of a shattered nation where mass graves hold many of the dead.

Meanwhile, as the U.N. said the Haitian government had declared an end to searches for living people trapped in the rubble, yet another survivor was reported. French rescuers said they had tunneled to a 23-year-old man who was alive and in good health 11 days after the quake, buried under the wreckage of a fruit and vegetable shop.

A doctor reached the man through the tunnel and water was delivered as well, said Lt. Col. Christophe Renou, a French Civil Protection official who is part of a team working at the site.

"Life doesn't stop when a government says stop," he said. "There is still some hope, but it is going to take some luck and God's help because there are so many destroyed buildings."

Authorities have stopped short of explicitly directing all teams to halt rescue efforts, and hopeful searchers continued picking through the ruins. But U.N. relief workers said the shift in focus is critical to care for the thousands living in squalid, makeshift camps that lack sanitation. While deliveries of food, medicine and water have ticked up after initial logjams, the need continues to be overwhelming and doctors fear outbreaks of disease in the camps.

"It doesn't mean the government will order them to stop. In case there is the slightest sign of life, they will act," U.N. spokeswoman Elisabeth Byrs said. She added that, "except for miracles, hope is unfortunately fading."

All told, some 132 people have been pulled alive from beneath collapsed buildings by international search and rescue teams, she said.

Experts say the chance of saving trapped people begins diminishing after 72 hours. One mother still missing her children said it's too soon to give up.

"Maybe there's a chance they're still alive," said Nicole Abraham, 33, wiping away tears as she spoke of hearing the cries of her children - ages 4, 6 and 15 - for the first two days after the quake.

Only a small number of funerals have been held since the 7.0-magnitude quake struck, with most people buried anonymously and without ceremony in mass graves on the outskirts of the city. An estimated 200,000 people died, according to Haitian government figures cited by the European Commission. The United Nations said Saturday the government had preliminarily confirmed 111,481 bodies, but that figure does not account for corpses buried by relatives.

While the two-hour ceremony was held for Msgr. Joseph Serge Miot and vicar Charles Benoit, who also perished in the Jan. 12 earthquake, people in the crowd of about 2,000 wept for deeply personal losses.

"We feel like we have lost everything. Our child, our country, our friend," said Junior Sant Juste, a 30-year-old father whose 3-year-old daughter died when his home collapsed.

The Mass, celebrated in a small park near the collapsed cathedral, offered "a way to share the pain and find solidarity," said his wife, Roth Boisrond.

As many as 200,000 people have fled the city of 2 million, according to the U.S. Agency for International Development. About 609,000 people are homeless in the capital's metropolitan area, and the United Nations estimates that up to 1 million could leave Haiti's destroyed cities for rural areas already struggling with extreme poverty.

The quake destroyed key government buildings including the National Palace, hampering the work of what was already a weak and inefficient state. In the days after the quake, aid groups complained about the U.S. military control of the international airport, which became key for supplies because of a damaged seaport.

Flights have since increased, but President Rene Preval and former French Cabinet Minister Nicole S. Guedj on Saturday appealed for the creation of a U.N. humanitarian intervention force to coordinate and mobilize aid in international disasters. The force could be known as the Red Helmets, they suggested, as opposed to the blue-helmeted U.N. military peacekeepers.

"The great problem is the coordination of aid," Preval told reporters at the archbishop's funeral. "What's needed is that the aid be organized at a global level so that it can be mobilized rapidly so there will be no confusion on the ground."