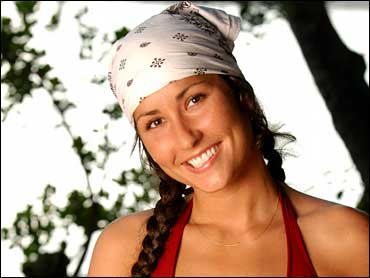 
Why Rory Freeman is gone:

Sarge, age 40 - I guess there's a reason they call Lea "Sarge" and not general. His alliance is now worthless and it's all his fault. Lea must feel like the biggest old fool there ever was after he was taken in by the charms of Julie and Twila. The decision to boot John last week will continue to prove costly unless there is a major shift in tribe dynamics.

If you watch "Survivor: Inside" on the official Web site, Twila revealed, while voting, that Sarge would have been the target if he hadn't won immunity.

Lea is strong and smart, but there is no way he can win seven consecutive immunity challenges. He is in deep trouble. At the surface, he has little recourse right now. His plan for the immediate future should be to outlast Chad and Chris and hope for a fissure to develop between the women. It wouldn't hurt to make one run at Julie and Twila to try and guilt them. Lea's only real hope is Eliza or Ami saying or doing something extremely stupid.

Chad, age 35 - Chad's instincts about Julie last week were proven correct, but that knowledge doesn't mean anything now. He is in the same boat as Chris and Lea who were easily taken in by Julie. His amiable persona might buy him time, but no one wants to face him in the final two.

Chad had a stunned look on his face as he saw Rory walk away, and for good reason. However, he cannot let that sense of shock set in permanently. From this point on, he has to examine every one of his actions and words carefully to make sure they don't lead to his demise. The women are in control now and he needs to accept that as soon as possible. Chad's best bet is to remain focused and look for mistakes to capitalize on. Both of those tasks are difficult if you are out of the game mentally.

Chris, age 33 -Chris is also now stuck in a failed alliance. His position is a demoralizing one, but he has experience with this type of blow to his self-concept. In episode one, he was responsible for his tribe losing the immunity challenge, but he didn't dwell on it too long and survived because of his resolve and interpersonal skills.

Chris' attempts at making several one-on-one pacts were humorous, but it's always a good idea to have a backup plan. Unfortunately for him, it looks like Chris' backup plan needs a backup plan.

Julie, age 23 - This kid can play. It is important to remember that all of this week's events were set up by Julie's brilliant ploy last episode, when Julie tricked Twila into revealing that she had been asked by the men to join their final four. Julie then told Twila that she received the same offer, which was a very good lie. This conversation served to effectively separate Twila from the men. The payoff came this week when Julie brought Twila back into the now-dominant six-member female alliance without much argument.

There is a downside to her scheming. Everyone left in the game right now will be on the jury if they don't finish in the top two. If Julie were to make that final two, she would have a lot of problems getting the five necessary votes to win. This is because it's highly unlikely that Chris, Chad and Lea will vote for her to win after her blatant betrayal.

Twila, age 41 - Twila must have a remarkable poker face because I was just as surprised as the guys when she rejoined Yasur. Absence must make the heart grow fonder because the level of affection between Scout and Twila was unexpected and had to be unnerving for the guys.

Twila actually would have been better off siding with Lopevi because she will probably be the first woman to go after they pick off all the men due to her awkward nature.

Scout, age 59 - It was a quiet week for Scout who is apparently letting Ami do all the heavy lifting strategy wise for the time being. If this is intentional, it is a smart move because it keeps the blood off of her hands and allows her to remain above the fray.

Eliza, age 21 - Shockingly, it was a quiet week for Eliza as well. She just needs to stay off people's nerves and contribute around camp, so she doesn't trigger a controversy that will hurt her alliance.

Ami, age 31 -Ami is playing this game as hard as anyone ever has. However, she might be making it too personal. There was no need to tell Rory that he was going to go before Travis and there was no need to keep food secrets away from the guys. These little blips on the arrogance radar screen are troubling for her chances.

It appears that Ami is running the show now and that's got to feel good. However, she should take note of what happened to Rob Cesternino and Jon Dalton. Both were masterminds who led their alliances deep into the game - only to be taken out because of the huge targets they placed on themselves by being leaders and controlling the game so effectively.

Solution? She needs to spread accountability for alliance decisions around. When Chad is booted in the immediate future, Ami shouldn't be the sole party blamed for the decision. It would be wise for her to start talking Scout up as the actual leader of the alliance.

Leann, age 35 - Her enthusiasm and energy are infectious. Cheerleader isn't the most glamorous role in this game, but keeping morale up is a worthy goal and helps to maintain unity.

Predictions for next week: Lea doesn't win immunity and is sent packing.

My current ultimate Survivor pick: Logically, the winner will most likely be a woman.

I think Julie's most deserving of victory at this point, but rarely does the best player actually earn the title of sole survivor. Scout appears to still be the favorite because of her inherent likeability and non-threatening nature.