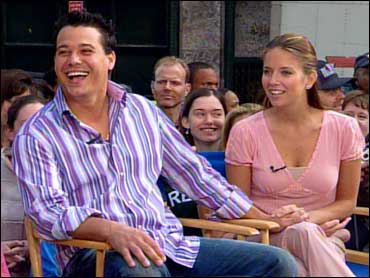 (CBS) Former federal agent Philip continues to be as nutty as ever in camp, but Wednesday night on "Survivor: Redemption Island" he showed surprising vulnerability in challenges, something else to widen the target on his back.

But even with two immunity idol losses in a row, his tribe chose to keep him for another week of craziness and instead blindsided another of its members. He never saw it coming. (SPOILER ALERT).

Boston Rob was calling the shots and he chose to oust Matt Elrod because the 22-year-old pre-med student went to congratulate the other tribe after its immunity challenge victory and because he thought Matt was getting to close to Andrea, another student on the tribe.

Rob, who married a fellow contestant, knows a thing or two about how strong romantic alliances can be in this game.

Rob also saw ample evidence last week of Philip's tendency to run off at the mouth, so when Philip pledged, "You own my vote," Rob refused to share strategy and instead told him he would signal during tribal council about whom to vote off.

Meanwhile, in the other tribe, Russell Hantz had a confrontation with chicken farmer Ralph Kiser. Rusell later branded Kiser as one of the dumbest "Survivor" contestants ever. But, remember Ralph found the hidden immunity idol without a clue. How dumb can that be?

Next week looks to be interesting as the audience gets to see its first "Redemption Island" face-off between attorney Francesca, eliminated last week, and student Matt. And the contestants will get to see just how much this new twist will affect the game.