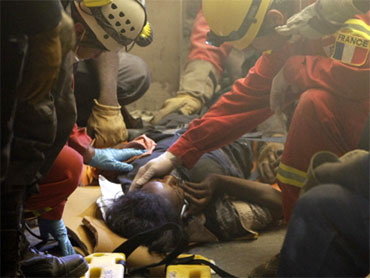 Trapped for five days in the rubble of a hospital, nailed to the floor by the leg of a bunk bed, the 23-year-old carpenter played his life over in his mind and dreamt how he would live it differently if a miracle set him free.

"I kept thinking, what a pity to leave so early, with so little accomplished," Benito Revolus said, that miracle now a reality.

Despite a severely infected leg, a punctured lung and numerous gashes and bruises, Revolus' smile grew ever wider as he recounted his story, lying on the lawn of the damaged headquarters of Medecins Sans Frontieres or Doctors Without Borders, a French aid group.

Revolus was being treated for a stab wound at another hospital and was lying in the middle of a three-level bunk bed when the earthquake hit Jan. 12, killing an estimated 200,000.

"I thought it was the end. The ceiling collapsed before I even understood what happened," Revolus said. Others in the room fled, but he couldn't because the top section of his bed collapsed on him, piercing through his left thigh and pinning him to the ground.

But the top bunk also provided the breathing space that kept him alive - leaving him just enough to turn his chest around when the pain became unbearable.

Doctors typically consider three days the maximum time a seriously injured person losing blood can survive underground. But Revolus spent five days under several feet of rubble, with nothing to drink or eat. "I got so, so hungry," he said, smiling again.

"That Benito got out of there was unusual," said Susan Shepherd of New York, the MSF coordinator in Haiti. "He's a lucky guy."

Revolus wasn't so surprised. "I never completely lost hope," he said, though he acknowledged it was very difficult to remain optimistic when his shouts drew no response. And he knew that having no other survivors with him diminished his chances of rescue.

With nothing else to do, Revolus spent his lonely vigil praying and reflecting on his life. "I thought about how sad my mum must be because of me," he said, adding he was certain he felt her prayers.

He also did an accounting of his good and bad deeds.

"I asked God to free me, and I promised him I wouldn't waste my second chance," said Revolus, who had initially been hospitalized after being stabbed in a fight over money.

His first step would be to forgive all old scores, he said, and then he pledged to "never play at the lottery again."

Revolus said tiny cracks in the debris helped him track the days, allowing him some idea of whether the sun was out or not.

He said it was just after dawn on the fifth day, Saturday, that God answered his prayers, and probably his mother's as well.

"I heard three taps from a hammer," he said, showing how he took a stone to tap back three times.

For the rest of the day, he heard a jackhammer, circular saws and pliers working. About 4 p.m., he heard a foreigner say in broken French: "My friend, I'm here with other friends, and we're going to get you out."

Five minutes later, someone lifted a slab above him and Revolus felt a rush of warm tropical light from Haiti's late afternoon sun.

"Then I saw a human face. It was a young white man, grinning," Revolus said. "He said, 'Good afternoon,' and I answered, 'Thank you. Thank you."'

He described the rescue team as American, with bright yellow uniforms and plastic helmets. The team began applauding, aware that finding someone alive so late in the rescue effort was a small miracle.

Since Saturday, a handful of others have been pulled out alive, including 69-year-old Ena Zizi, who was rescued from the Roman Catholic compound and flown to the Dominican Republic for treatment on Tuesday. One of the last confirmed rescues was overnight Tuesday, when Lozama Hotteline, 26, was pulled from a supermarket in midtown Port-au-Prince, smiling and singing hymns.

A Taiwanese team of rescuers was still busy Wednesday at a gas station where they had located two people alive the day before. But it rained overnight and a magnitude-5.9 tremor shook the Haitian capital in the morning. All this has made the debris more compact, said Dr. Yi Ting Tsai. The two survivors believed inside weren't giving any sign of life Wednesday, he said.

Revolus knows he's "unbelievably lucky" to have been dragged out. Once he can walk again, he hopes to be able to travel to the United States to meet the firefighters who saved him.

"I'd like to visit them to say thank you," Revolus said. "And maybe they can also help me get a visa to live in America."

Another survivor was Moses Joacoin, 7, who was plucked from a certain tomb by teams from New York and Virginia seven days after his apartment collapsed on top of him and his siblings. Moments later, his 12-year-old sister was pulled out alive, reports CBS News correspondent Bill Whitaker. Three other siblings died here. Coming to search on her own, their aunt heard the children's muffled cries.

"I didn't know anyone was alive in there," she said. "But then they were crying and asking for water."

At the Israeli field hospital they were treated and released today in good health.

Also Wednesday, CNN had the story of a 5-year-old boy pulled out of the rubble after eight days buried.

Crews at the cathedral compound site Tuesday managed to recover the body of the archbishop, Monsignor Joseph Serge Miot, who was killed in the Jan. 12 quake.

International aid teams have saved 121 people from the rubble, an unprecedented number, according to aid organization. Dr. Jon Kim Andrus, deputy director for the Pan American Health Organization, said that "countless more have been rescued by Haitians working with no equipment at all," he said.
Yet the colossal efforts to help Haiti were proving inadequate because of the scale of the disaster. Expectations exceeded what money, will and military might have been able to achieve.

The World Food Program said it has distributed about 1 million food rations to 200,000 people around the capital - but that is just a tenth the number it hopes to reach.

Governments have pledged nearly $1 billion in aid, and thousands of tons of food and medical supplies have been shipped. But much remains trapped in warehouses, or diverted to the neighbouring Dominican Republic. Port-au-Prince's nonfunctioning seaport and many impassable roads complicate efforts to get aid to the people.

Aid is still being turned back from the single-runway airport, where the U.S. military has been criticized by some of poorly prioritizing flights. The U.S. Air Force said it had raised the facility's daily capacity from 30 flights before the quake to 180.

U.S. Defence Secretary Robert Gates said the military will send a port-clearing ship with cranes aboard to Port-au-Prince to remove debris that is preventing many larger aid ships from docking.

The U.N. was sending in reinforcements as well: The Security Council voted Tuesday to add 2,000 peacekeepers to the 7,000 already in Haiti, and 1,500 more police to the 2,100-strong international force.

Watch video from CNN of a 5-year-old pulled from earthquake rubble: