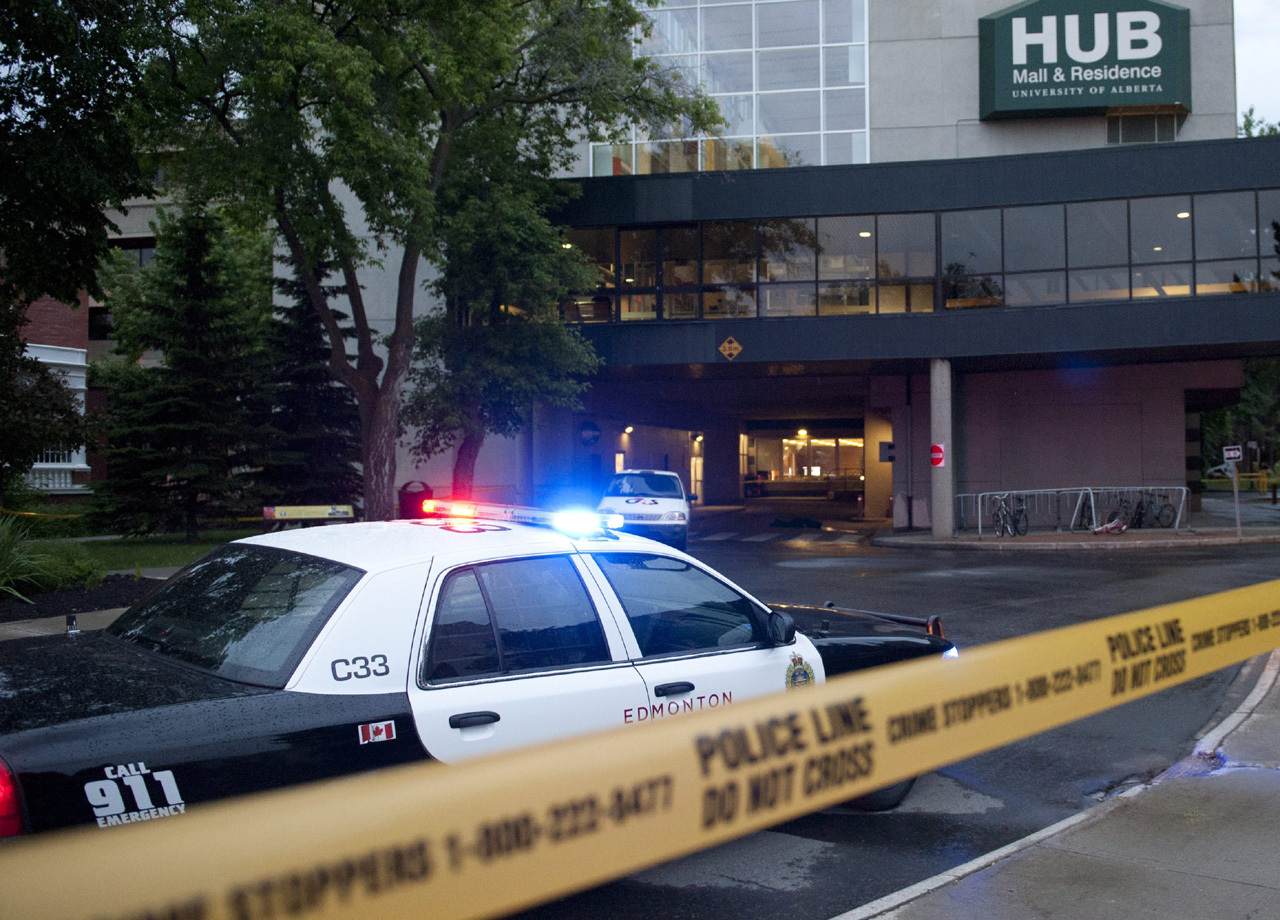 Edmonton police Supt. Bob Hassel said in a news release that Travis Baumgartner was stopped near a border crossing in Lynden, Washington, southwest of Abbotsford, British Columbia. Officials said Baumgartner was in his pickup truck and was alone.

Police said a sum of money was found in the truck when Baumgartner was arrested. Police had earlier called it a "significant" sum.

Baumgartner, 21, had been on the run since Friday when four armed guards were gunned down, three of them fatally. He faces three counts of first-degree murder and one count of attempted murder.

Baumgartner was the fifth member of a G4S Cash Solutions crew that was re-loading bank machines at a University of Alberta mall and residence where the shooting happened, police said. The armored truck was found abandoned but running not far from the security company's offices. Dead at the scene were Michelle Shegelski , 26; Eddie Rejano, 39; and Brian Ilesic, 35.

"We're grateful to the border officials at Lynden, Washington, for their excellent work in arresting a man we believe was armed and extremely dangerous," Hassel said in a statement. Canadian police officials were on their way to the U.S. to bring Baumgartner back to Edmonton.

Police had launched an international manhunt to find Baumgartner.

G4S Cash Solutions spokeswoman Robin Steinberg said the company would conduct its own investigation into the shooting. The company said Baumgartner had only been on the job for three months.

"We applaud the dedication of the Edmonton Police Service, and other law enforcement agencies in apprehending Travis Baumgartner today," Steinberg said in a statement. "Our thoughts remain with the families and friends of the victims and also with the Baumgartner family."

Baumgartner's mother issued a statement Friday pleading for her son to surrender and apologizing for an argument they had.

Such shootings are rare in Canada, where residents are nervous about anything that might indicate they are moving closer to U.S. levels of gun violence. The oil boom town of Fort McMurray, Alberta, however, often has drug-related shootings, and Vancouver often has gang shootings. Gunfire at Toronto's most prominent mall this month left two dead and several injured and a shooting at an Edmonton club in 2006 left three dead.

Police said Baumgartner was driving his Ford F-150 truck with an Alberta license plate when he was arrested.

Steven Munz, a close friend of Baumgartner, had said that Baumgartner had been on the job for only three months and wanted to eventually become a police officer, but said Baumgartner didn't believe he had what it took. Munz said he had noticed a change in his personality in the last year, and that he had been irrational at times.

In a profile on the dating website Plenty of Fish, Baumgartner bills himself as an armored car guard interested in video gaming. A photo shows him shirtless holding a cellphone. He says he has a laid back personality and a "10" physique.

"I'm a great guy. We don't come around often," he writes.

Baumgartner lived with his mother and step-sister in Sherwood Park, a bedroom community just east of Edmonton.