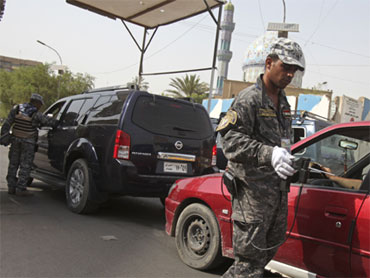 Police and hospital officials said the attackers arrived in three cars and used pistols fitted with silencers in the assault in the mainly Sunni Mansour district. Security forces subsequently sealed off the area and were searching for the attackers, the officials said. They spoke on condition of anonymity because they were not authorized to speak to the media.

Violence levels have significantly dropped in Iraq since 2008 but attacks still occur daily, particularly in Baghdad, where al Qaeda appears determined to show it is far from being a spent force despite the killing and capture of hundreds of its members and leaders by Iraqi and U.S. forces.

A similar attack took place last Thursday in Baghdad's Sunni Azamiyah district, a former al Qaeda stronghold, where suspected militants from the terror network stormed a checkpoint, killing 16 members of the security forces and briefly planting their banner nearby before fleeing.

The attacks in Azamiyah and Mansour were likely to raise concerns that insurgents are successfully taking advantage of the enduring political vacuum nearly five months after Iraq's parliamentary elections failed to produce a clear winner. Politicians are still bickering over the formation of a new government, with the main hurdle being who should become the next prime minister.

Incumbent Shiite Prime Minister Nouri al-Maliki, who has been struggling to hold on to his post, told state television late Monday that he was prepared to "suspend" his candidacy for a second, four-year term in office, but that doing so would not bring about a breakthrough.

Some of his Shiite allies have publicly called on al-Maliki to step aside, while loyal supporters in his State of Law coalition are sticking by his candidacy.

Al-Maliki's comments came just hours after President Obama promised again to remove all but 50,000 U.S. troops from Iraq by the end of the month, wrapping up the combat mission of the U.S. military in Iraq. The last American soldier is due to leave Iraq by the end of next year.

Appearing at times angry when lashing out at his critics, al-Maliki said he was a political target for nay-sayers because he refuses to sugarcoat Iraq's problems.

"I do not sweet talk," he said in the hour-long interview, taped earlier. "They say they want a weak prime minister. The country is facing a lot of problems and if the prime minister is not strong, then the country will crumble, and sectarianism and warlords will return."

"I do not understand the theory of a weak prime minister who will be a prisoner in the hands of one group or another," said al-Maliki, who cites the improved security as the biggest feat of his tenure.