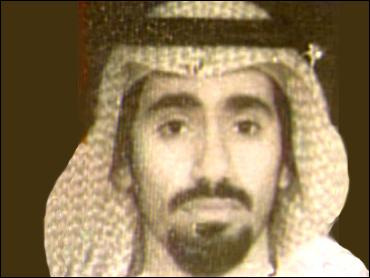 The suspected chief of al Qaeda operations in the Persian Gulf is apparently cooperating with investigators, who hope Abd al-Rahim al-Nashiri will shed light on terrorist plans in the works and his own alleged involvement in deadly violence against Americans.

Al-Nashiri, a suspected mastermind of the USS Cole bombing in October 2000, was captured in Yemen earlier this month and is in U.S. custody, officials announced Thursday.

According to CBS News Correspondent David Martin, this is the United States' biggest catch since the capture in September of Ramzi binalshihb, a member of the Hamburg cell which carried out the Sept. 11 attacks.

Al-Nashiri is probably the highest-ranking lieutenant of bin Laden seized since the March capture of Abu Zubaydah, al Qaeda's chief coordinator of terrorist cells worldwide. However, the capture of al-Nashiri did little to quell fears of a resurgent al Qaeda that is plotting new terrorist attacks.

The FBI on Thursday warned that terrorists might try to attack shipping, possibly using scuba divers to put explosives on vessels. The warning, contained in the FBI's weekly bulletin to state and local law enforcement officers nationwide, was not based on any information about specific targets, a federal law enforcement official said.

U.S. officials are most interested in what al-Nashiri knows about attacks still to come, but also plan to question him on the Cole bombing which 17 U.S. sailors. A conviction in that case could mean a death sentence.

The questioning of other senior figures, such as Abu Zubaydah and Omar al-Farouq, bin Laden's Southeast Asia operations chief, have provided a wealth of information — often of unknown reliability — of planned terrorist operations. Their statements have led to several public alerts in the past year.

U.S. officials had recently said a senior al Qaeda leader had been caught, but they had declined to identify him. On Sunday, Homeland Security Director Tom Ridge said the leader was providing information to his interrogators.

Martin reports that al-Nashiri and Osama bin Laden first met in the 1980s when they both went to Afghanistan to aid in the Muslim holy war against the Soviet army. After the Soviets withdrew, al-Nashiri stayed with bin Laden and, according to U.S. officials, trained the al Qaeda operatives responsible for the 1998 bombings of two U.S. embassies in Africa, which killed 250 people, including 12 Americans.

"He has a reputation as a ruthless operator," one U.S. official said. "He is a very committed follower of Osama bin Laden."

One of the suicide bombers in the attack on the Nairobi embassy, known only as Azzam, is believed to have been his cousin. Al-Nashiri is said to be Saudi and in his 30s.

He has also traveled under a number of other names, including Umar Mohammed al-Harazi and Abu Bilal al-Makki. U.S. officials believe he was in Ghazni, Afghanistan, around the time the American military campaign began there in October 2001. He is thought to have moved to Pakistan when the Taliban fell, and then on to Yemen.

In the Cole attack, U.S. officials have said al-Nashiri gave telephone orders to the bombers from the United Arab Emirates. He then fled to Afghanistan.

In addition to the Cole attack, officials say he has been involved with a number of plots targeting the U.S. Navy in the past three years.

He is thought to be behind a nearly identical attempt to bomb another destroyer, the USS The Sullivans, nine months before the Cole attack, at Aden. That attack failed when the suicide boat, overloaded with explosives, sank.

Most recently, he has been tied to a failed al Qaeda plot to bomb U.S. and British warships crossing the Strait of Gibraltar, U.S. officials have said. In June, three Saudis were arrested in Morocco in connection with that plot.

He is also suspected of being behind plans to bomb the 5th Fleet Headquarters in Bahrain, a plot revealed in January by another top al Qaeda operative captured by Pakistan after fleeing Afghanistan.

The 5th Fleet has responsibility for the Persian Gulf and provides ships for the operations of U.S. Central Command, which is running the war effort in Afghanistan. It also supports the enforcement of the no-fly zone over southern Iraq, the U.N. economic embargo against Iraq and the monitoring of sea traffic from the Arabian Sea to the Gulf of Oman and the Persian Gulf.

U.S. intelligence also is investigating whether al-Nashiri was behind the Oct. 6 suicide boat bombing of a French oil tanker off the coast of Yemen, officials said. One crewman was killed.

The capture of al-Nashiri is the latest reported success in the U.S. effort to capture or kill top al Qaeda chiefs.

On Nov. 3, a CIA Predator drone fired a missile at a car in Yemen that was carrying several suspected al Qaeda operatives, killing Qaed Salim Sinan al-Harethi, bin Laden's top operative in that country. Al-Harethi is also suspected of involvement in the Cole plot.

In September, U.S. and Pakistani authorities captured Binalshibh, an alleged planner of the Sept. 11 attacks on the United States. He was an aide to Khalid Shaikh Mohammed, the suspected Sept. 11 mastermind who remains at large.

Bin Laden's son Saad and Tawfiq Attash Khallad, another alleged planner of the Cole attack, also remain on the loose.