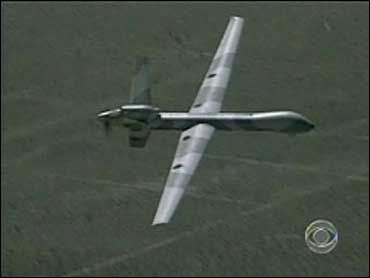 A suspected U.S. drone crashed in Pakistan's lawless tribal area near the Afghan border Sunday, a rare mishap for a program Washington has increasingly relied on to kill Taliban and al Qaeda militants, said intelligence officials and a local resident.

Local tribesman in North Waziristan were congratulating each other for shooting down the drone, said resident Saudur Rehman. But the Pakistani army rejected similar claims after a drone crashed in neighboring South Waziristan in 2008, saying it was a technical problem.

"I saw that the aircraft was coming down and finally crashed in an open area a distance from me," said Rehman, who indicated he heard gunfire just before the crash. "Tribesmen are celebrating and congratulating each other for shooting it down."

The crash occurred around 6 p.m. in the Hamdhoni area of North Waziristan, some 2.5 miles northwest of the main town of Miran Shah, said two intelligence officials, speaking on condition of anonymity because they were not authorized to talk to the media.

North Waziristan is dominated by militant groups that stage cross-border attacks against U.S. and NATO troops in Afghanistan. One of those groups, the Haqqani network, an al Qaeda-linked Afghan Taliban faction, is believed to have helped orchestrate the Dec. 30 suicide bombing at a remote base in Afghanistan that killed seven CIA employees.

In the roughly three weeks following the attack, suspected U.S. drones carried out 12 missile strikes in North and South Waziristan, an unprecedented volley since the covert CIA-led program began in earnest in Pakistan two years ago. The strikes are part of a broader trend of President Barack Obama's strategy of relying more heavily on the unmanned aircraft to kill militants in Pakistan than his predecessor.

The militants have responded with a wave of killings targeting people they suspect of helping facilitate the drone strikes, including six Pakistani men whose bodies were found in two different areas of North Waziristan on Monday.

Pakistani intelligence officials have said at least 30 of their operatives were killed in North Waziristan in 2009, many with notes attached to the bodies alleging they were U.S. spies.

The bodies of five men who had been fatally shot were found on the outskirts of Miran Shah, said the officials, speaking on condition of anonymity because they were not authorized to talk to the media.

Authorities found the body of a sixth man who had been beheaded near Mir Ali, another town in the tribal area, said resident Razaullah Wazir.

"This is the fate of American spies," said a note attached to the body written in the local Pashtu language, according to Wazir.

The U.S. does not discuss the drone strikes, but officials have said that they have killed senior al Qaeda and Taliban leaders in the country.

Pakistani officials protest the strikes as violations of the country's sovereignty, but many analysts believe the U.S. has a secret deal with the government allowing them.

The U.S. has increased its use of the drones in response to Pakistan's reluctance to target militants using its territory to attack coalition troops in Afghanistan. Pakistani officials say they have their hands full battling local Taliban militants waging war against the state.

The Pakistani army launched a major ground offensive in the Pakistani Taliban's stronghold of South Waziristan in mid-October, triggering a wave of retaliatory violence that has killed more than 600 people.

Pakistani police said Sunday that they arrested four people suspected of carrying out a bombing against a Shiite Muslim procession in the southern city of Karachi that killed more than 40 people.

The Pakistani Taliban claimed responsibility for the attack, but Karachi police chief Wasim Ahmed said the four men arrested were members of Jundallah, a militant group based in the city.