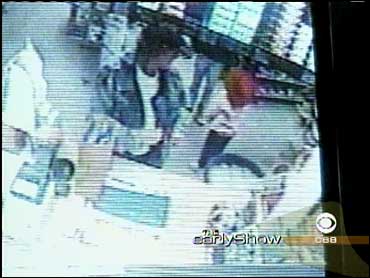 A man and woman are in police custody in the possible sexual abuse of a 3-year-old girl and teenage boy thanks, authorities say, to the diligence of a Decatur, Ga., woman who continued to insist that authorities look into the case.

Conecuh County District Attorney Tommy Chapman said the man identified himself as Jack Wiley, 58. According to the Mobile (Ala.) Register, he was charged with two counts of rape and one count of sodomy.

Chapman said the woman gave her name as Glenna Faye Cavender, 40. The newspaper says she was charged with child abuse.

Chapman said both had given investigators several false names.

"We do not know at this time the true identities of either of these people," Chapman said, "but we are comparing fingerprints to determine that. I can assure you this investigation is ongoing and more severe charges are expected."

He said one of the names the man gave authorities was that of a sex offender.

Wiley's bond was set at $3 million, and Cavender was being held on a $2 million bond.

saw a 3-year-old girl with a man while shopping in an Evergreen, Ala., convenience store (video)
on Jan. 15, Chapman said.

Dean said something about the little girl didn't seem right, and the man wasn't treating the child like a relative.

Dean told the newspaper she became suspicious and was compelled to act after she saw the child's behavior and the vacant look in her eyes.

Chapman said Dean's persistence led to the discovery of two suspected cases of child abuse that he described as among the most severe uncovered in the county.

"We believe the 17-year-old boy is a victim of sexual abuse," he said, "and a doctor who examined the 3-year-old girl said there was evidence she was repeatedly raped."

Dean copied the license plate number on the man's Chevy Suburban as he left the store with the girl, but a 911 dispatcher told her everything checked out with the car.

Haunted by the girls' eyes, Dean did some Internet checking for missing and exploited children and found a girl in Ohio who resembled the child.

She called Ohio authorities and a national hot line for missing children before finally contacting the detective working the Ohio case, but Dean felt no one was taking her seriously.

"I called the John Walsh show ('America's Most Wanted'), 'Crimestoppers,' and finally I had the tag run," she said. "It came back to the 2001 Honda. It didn't check out.

"Then I called the Alabama Bureau of Investigation, and asked if they could tell me who responded to the 911 call. I asked them to look at the store's videotape. They said they needed a court order.

"I have no doubt in my mind why we have so many missing and exploited children in this country."

Dean then took matters into her own hands, calling the store and driving back to Evergreen with some friends.

She was looking at the security video when Evergreen Police Officer Brian Davis walked in by chance. He wrote a report and started looking for the girl and man.

Davis found the man living with the woman and two children in a squalid home along a remote stretch of U.S. 84, Chapman said. He said the victims both appear to be severely traumatized and are in state custody.

Dean said she just knew something was wrong that day in the store.

"I cried when I left there that Sunday," she said. "I'm crying right now just thinking of it. I had to go through hell before anyone would listen to me. I thought I was going crazy. I'm just glad she's safe."