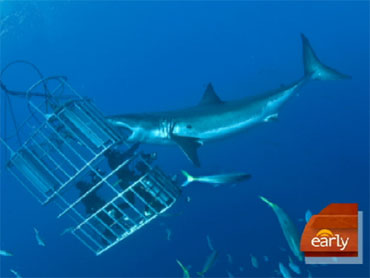 Sharks make many people nervous about even stepping into the ocean. But for Don Carpenter, an underwater shark photographer, it's all about swimming closer to them.

Carpenter travels around the world to capture these animals on film. But he appeared on "The Early Show" Friday from his hometown of Lubbock, Texas, to discuss his stunning underwater shots of sharks.

Carpenter showed the huge, 25-pound Nikon camera he uses to get as close as he can to the shark's body -- often, its jaws.

But how close does he really get?

He explained, "First rule of underwater photography is get close, and when you think you're close enough, you get closer."

He said in some of his shots the great white sharks are just inches from the camera lens.

But is it dangerous?

"Early Show" news anchor Erica Hill said she was going to take his hesitation as a "yes."

Carpenter continued, "We do it for a living and we went here specifically to photograph and have experiences with these animals. I'm not going to kid you, I was very pleased that there were three-inch stainless steel bars between us, but for the most part, (the shark) was very docile. We were something odd to her and we probably had bizarre electrical signals because our hearts were beating out of our chests. So for two days, she hung out with us. And then on the second day of the trip is when she started getting a little more brave and she started mouthing the cages and coming up to them."

But, he said what looks like a shark attack in the photos, isn't actually what's going on.

Carpenter said, "What you're seeing in like the big wide-angle shots where (the shark wrangler who) is actually pushing up on her nose and his happened comes down around her, what you're seeing there is shark coming in checking us out. And (the shark wrangler) is pushing on the nose, he's trying to give the underwater photographer just a few seconds to get back into the cage so he doesn't get hung up on her bottom jaw. And when her jaw does get hung up in and the whole cage moves a little bit, but she wasn't really attacking this thing."

For more of Carpenter's shark stories, click on the video below.