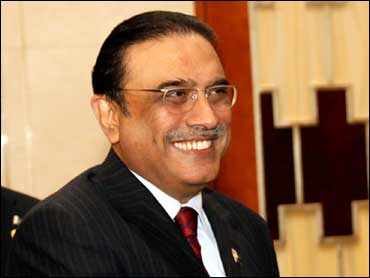 Swiss authorities said Wednesday they could not reopen a money-laundering case against the Pakistani president as long as he enjoys legal immunity, a welcome answer for the Islamabad government after the Supreme Court forced it to request the case be resumed.

The Swiss decision marked the latest development in a months-long struggle between the government and the court since the latter revoked an amnesty that protected President Asif Ali Zardari and thousands of other politicians, bureaucrats and party workers from corruption charges.

Washington has watched the dispute with concern that it could distract Pakistan from its fight against Taliban and al Qaeda militants, some of whom stage cross-border attacks against U.S. and NATO troops in Afghanistan.

The court stepped up its pressure on the government in recent days, threatening the head of the anti-corruption agency with prison if he didn't reopen all the cases that had been covered by the amnesty by Wednesday, including one against Zardari in Switzerland.

The government had dragged its feet, arguing Zardari enjoyed immunity as president. But it succumbed to court pressure and sent a letter to Swiss authorities asking they reopen the case, government lawyer Abid Zuberi said Wednesday.

Geneva prosecutor Daniel Zappelli told The Associated Press that he has yet to receive the Pakistani request.

But he said he can't reopen the case against Zardari, who was elected president in 2008 after years of battling corruption allegations, because he enjoys "absolute immunity" as a head of state.

"We could go further only if the competent authorities in Pakistan decide to lift the immunity of the head of state, which I do not know whether it is possible according to their constitution," said Zappelli, speaking in English. "If not, we can't. Absolutely not. Period."

Zardari and his late wife Benazir Bhutto were found guilty in absentia in a Geneva court in 2003 of laundering millions of Swiss francs (dollars). They were handed six-month sentences and fined, but both punishments were automatically suspended when they appealed.

Swiss authorities abandoned the case in 2008 after the Pakistani government asked them to. The case was among the thousands dropped as a result of the controversial amnesty that was part of a power-sharing deal that allowed Bhutto to return from exile and contest elections.

The amnesty was scrapped in December by the Supreme Court, which is led by a judge whom Zardari supporters say his hostile to his rule.

Bhutto was killed in a December 2007 gun and suicide bomb attack and Zardari designated her political successor. He became president after his party won parliamentary elections and forced military ruler Pervez Musharraf to resign.

He has struggled to make much of a dent in the country's myriad problems, but his government has been praised of late in the West for battling the Taliban in northwestern border regions.

The U.S. has pushed Islamabad to keep up its offensives, arguing that militants on its side of the border are involved in attacks on American and NATO troops in Afghanistan.

Earlier Wednesday, six soldiers and 20 Taliban militants were killed when troops repulsed an attack by dozens of insurgents on a checkpoint close to the Afghan border, a statement from Pakistan's paramilitary Frontier Corps said.

Also Wednesday, the army used helicopter gunships and mortar fire to kill 15 militants in the Orakzai tribal region, where many Pakistani Taliban fighters are believed to be based, said local government official Samiullah Khan.

But one of the mortars accidentally hit a house, killing four civilians, said Khan.

Two missile attacks one hour apart destroyed an abandoned school near the town of Mir Ali, said the officials, who spoke on condition of anonymity because they were not authorized to speak to media.

The U.S. rarely discusses its missile campaign. Pakistan publicly protests it as a violation of its sovereignty, though it is believed to secretly assist in the strikes.

North Waziristan has been the target of the majority of recent missile attacks. It is home to several militant groups who focus on battling U.S. and NATO forces in Afghanistan.
By Associated Press Writer Zarar Khan; AP writers Rasool Dawar in Mir Ali, Hussain Afzal in Parachinar and Frank Jordans in Geneva contributed to this report