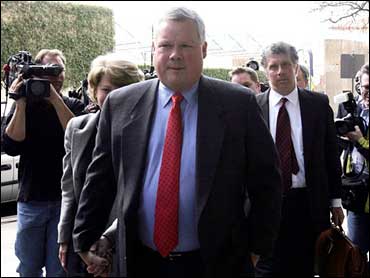 Lay, Skilling and Causey were scheduled to be tried together Jan. 17 on conspiracy, fraud and other charges related to the scandal-ridden company's collapse more than four years ago. The deal leaves Lay and Skilling with

After Causey's plea, U.S. District Judge Sim Lake granted a defense request for a two-week delay, pushing the trial for Lay and Skilling to Jan. 30.

His lawyer says Causey "will tell the truth" in the upcoming trial.

Causey will serve seven years in prison and forfeit $1.25 million to the government, according to the plea deal. However, if the government is happy with his cooperation, prosecutors can ask that his sentence be reduced to five years.

The maximum penalty for securities fraud is 10 years in prison, followed by three years of probation.

Click here to read the plea agreement (.pdf)
Causey, the government's 16th cooperating witness in exchange for a plea, had faced more than 30 counts of conspiracy, fraud, insider trading, lying to auditors and money laundering.

Causey agreed to testify against his former bosses in exchange for a leaner prison sentence than he would have received if convicted on all counts.

Department of Justice spokesman Bryan Sierra told CBS News that the plea agreement does not legally bind Causey to cooperate, although it offers an incentive to do so — it could reduce his prison term from seven to five years.

"We have not made a determination yet whether we will call him as a witness at trial," Sierra said.

Many of the charges against Causey overlapped with the 35 counts of fraud, conspiracy, lying to auditors and insider trading pending against Skilling.

The pair is accused of conspiring with others to fool investors into believing a wobbly Enron was healthy in the years leading to its December 2001 crash.

"I'm not surprised the judge granted the defense a few extra weeks to absorb this dramatic change in the case," Cohen said. "They need time to figure out what Causey is likely to say against them and how to deal with his testimony on cross-examination. The whole trial dynamic now is different."

Some of Causey's charges also overlap with the seven fraud and conspiracy counts pending against Lay, in which the former chairman is accused of perpetuating the ruse after Skilling's abrupt resignation in August 2001.

Causey, 45, could be more damaging to Lay and Skilling than former Enron finance chief Andrew Fastow, who pleaded guilty to two counts of conspiracy in January 2004. Unlike his former peer, Causey didn't skim millions of dollars for himself from shady deals.

Also, Lay has repeatedly pointed to Fastow as the crook who abused his trust, highlighting the former finance chief's admitted skullduggery.

"There is some safety in numbers from the government's perspective. It's not just Andy Fastow now, it's another senior official. That takes some of the pressure and burden off of Fastow," said Kirby Behre, a former federal prosecutor. "They might make an effective one-two punch in terms of government witnesses."

Another former prosecutor said the Lay and Skilling defense teams knew a Causey plea was possible.

"It changes the face of the trial for the prosecutors and the defense," said Jacob Frenkel. "They had to have some contingency plan for trial preparations for a case without Causey. Now they just put that plan in place."

He said the deal should streamline what had been expected to be a four- to six-month trial.