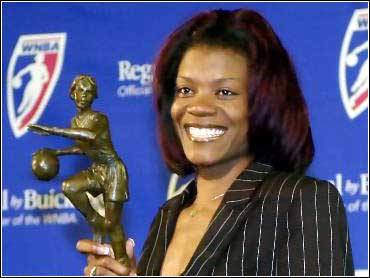 Houston Comets forward Sheryl Swoopes accomplished just about everything she set her mind to this season but she couldn't keep from crying Thursday as she accepted the WNBA trophy as the league's most valuable player.

Swoopes, a 1996 Olympic Gold Medalist, was the first WNBA player signed in 1997 but she immediately went on maternity leave and played sparingly her first season.

She started her pro career with defensive deficiencies but improved so much that on Tuesday she was named the league's defensive player of the year after winning the league's scoring title for the first time.

Getting the MVP trophy on top of all that brought out the emotions.

"It seems like when I think things can't get any better, they get better," Swoopes said. "I have a lot of people to thank. The one thing I said, if I won the MVP trophy I wasn't going to cry."

Leslie got 450 votes as the runner-up. Yolanda Griffith of Sacramento was third with 224 points and Natalie Williams of Utah fourth with 125 points. Cynthia Cooper, a two-time MVP winner, and Tina Thompson, both of Houston, finished fifth and sixth.

Swoopes said her slow start in the WNBA because of her pregnancy and the four years of hard work to reach the top made winning the MVP special.

"There were a lot of expectations placed on some of us when this league was started, Rebeca Lobo and Lisa Leslie too," Swoopes said. "To help the Houston Comets win three titles and then win this, that's makes it very special for me."

"When you go to a game and see a shot, a play or a player coming through, you say `did you see that? Wow,' " Ackerman said. "This year it seems that Sheryl Swoopes and `wow' were pretty much synonymous."

Swoopes averaged 20.7 points in the 2000 season, taking the league scoring title from Cooper, who won it the first three seasons of the WNBA. Leading the WNBA with 2.81 steals per game helped Swoopes win her defensive honor. She also had 3.8 assists 1.06 blocked shots and 6.3 rebounds.

"The one thing that could make this greater would be to beat LA," Swoopes said. "At this time of year, the real players take their games to another level and that's one thing that my teammates and I will have to do."