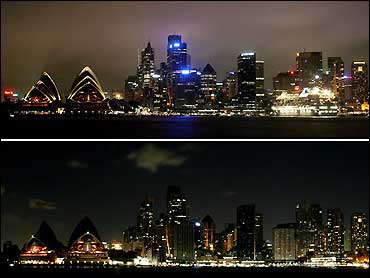 The Sydney Opera House's gleaming white-shelled roof was darkened Saturday night along with much of the rest of Australia's largest city, which switched off the lights to register concern about global warming.

The arch of Sydney's other iconic structure, the harbor bridge, was also blacked out, along with dozens of skyscrapers and countless homes in the 4 million-strong city, in an hour-long gesture organizers said they hoped would be adopted as an annual event by cities around the world.

Mayor Clover Moore, whose officials shut down all nonessential lights on city-owned buildings, said Sydney was "asking people to think about what action they can take to fight global warming."

Restaurants throughout the city held candlelit dinners, and families gathered in public places to take part in a countdown to lights out, sending up a cheer as lights started blinking off at 7:30 p.m.

Buildings went dark one by one. Some floors in city skyscrapers remained lit, and security and street lights, those at commercial port operations and at a sports stadium, stayed on.

"It's an hour of active, thoughtful darkness, a celebration of our awakening to climate change action," said Oscar-winner Cate Blanchett, who attended a harborside function to watch the event.

While downtown was significantly darker than normal, the overall effect, as seen in television footage from overhead helicopters, was that the city's patchwork of millions of tiny lights had thinned, not disappeared.

"We were expecting a big difference straight away, but it was just a little bit," said Sonja Schollen, who took sons Harry and James to a park to watch the skyline, joining dozens of other families. Children waved glo-sticks and sparklers while parents picnicked and sipped wine.

"It was quite sweet, actually, because the kids started chanting 'turn them out, turn them out.' You can see now the city's a bit dimmer," she said toward the end of the hour.

Organizers hope Saturday's event - which about 2,000 businesses and more than 60,000 individuals signed up for online - will get people to think about regularly switching off nonessential lights, powering down computers and other simple measures they say could cut Sydney's greenhouse gas emissions by 5 percent this year.

The amount of power saved by Saturday's event was not immediately known. But Greg Bourne, chief executive of World Wildlife Fund Australia and one of the architects of the event, said Sydney's power supplier Energy Australia had estimated it could be 5 percent of normal usage on a night of similar conditions.

"It's absolutely fantastic, there's a mood of enthusiasm and hopefulness and action," Bourne said. "I have never seen Sydney's skyline look so dark."

Australia, a nation of around 21 million people, is ranked as the world's worst greenhouse gas emitter per capita, largely because of its heavy reliance on coal-fired power stations.

Global warming has emerged this year as a mainstream political issue in Australia, and Prime Minister John Howard's government has announced initiatives such as the phased withdrawal from sale of energy-inefficient incandescent bulbs to blunt criticism of his refusal to sign the Kyoto protocol.

Sydney is not the first place to cut the lights for conservation. In February, Paris and other parts of France dimmed the lights for five minutes in a similar gesture, which also took hold in Rome and Athens.