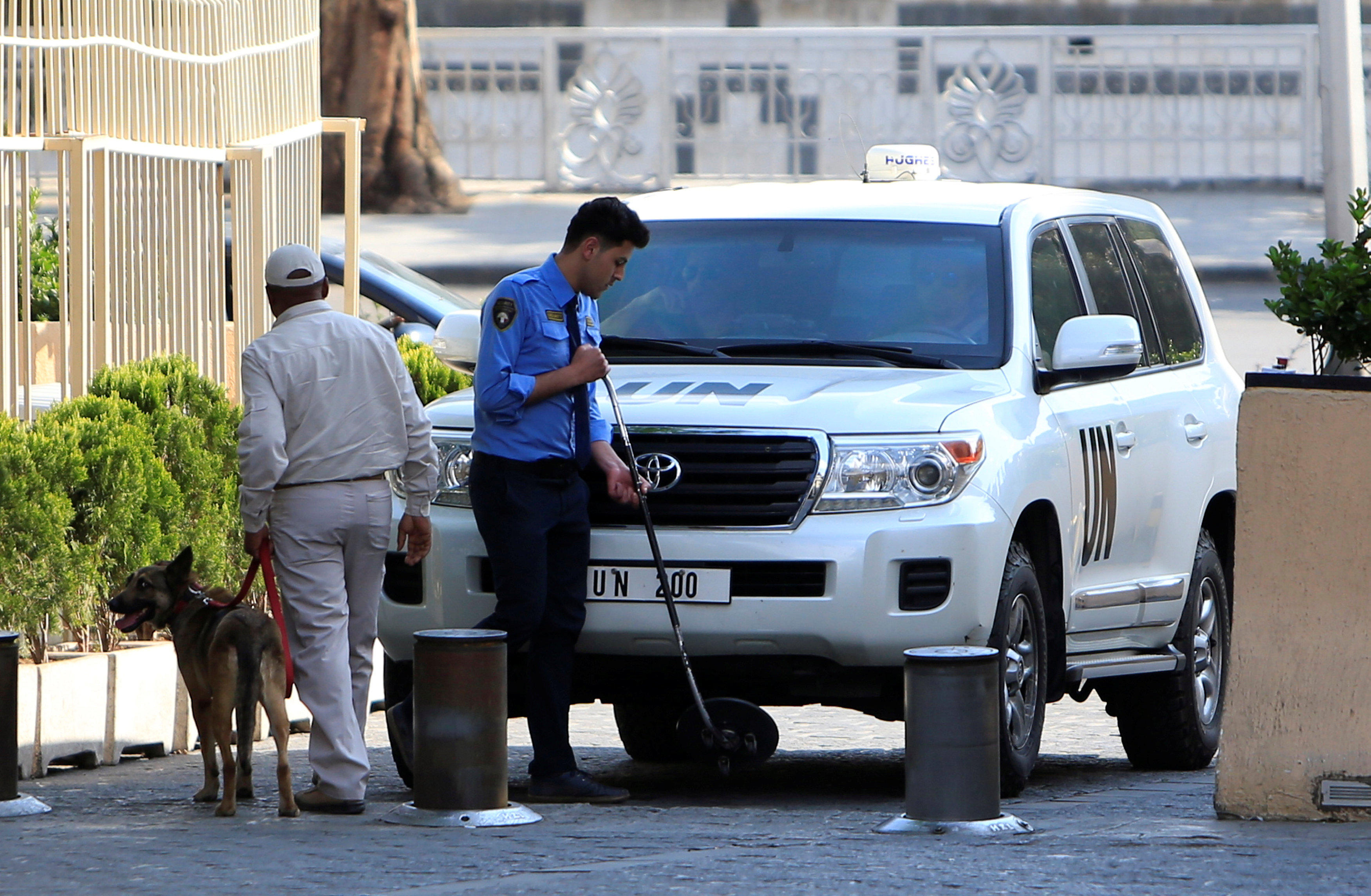 DAMASCUS, Syria -- A team of international chemical weapons inspectors' visit to the scene of an alleged poison gas attack in Syria has been delayed after a United Nations advance security team came under fire. It remained unclear Wednesday -- 11 days after the alleged attack -- when the team of inspectors from the Organization for the Prohibition of Chemical Weapons (OPCW) might reach the Damascus suburb of Douma, where the U.S. and allied nations say Syrian President Bashar al-Assad's Russian backed forces killed at least 40 people with banned weapons on April 7.

The security team "came under small arms fire and an explosive was detonated" at one of the two sites the team visited on Tuesday, OPCW Director-General Ahmet Uzumcu told the group's governing body on Wednesday. The U.N. team was not injured and returned to Damascus. The team is working with the OPCW inspectors, who arrived in Damascus over the weekend, to determine when it will be safe to carry out the first inspection visit.

Syrian media said the chemical weapons inspectors had entered Douma on Tuesday, but a Syrian diplomat said later that only the U.N. security team had visited.

The reported chemical attack led to Western airstrikes against the Syrian government over the weekend.

It was unclear who might have taken the shots or caused the explosion on Tuesday in Douma, more than a week after Syrian and Russian forces declared the town liberated from rebels forces and under their control.

The as-yet undefined delay in the inspectors' visit to Douma after the alleged attack has raised concerns that any evidence they might find could be useless.

Britain's U.N. ambassador Karen Pierce told the Security Council that she would call an emergency meeting of the group if the OPCW inspectors don't make it into Douma soon, reported CBS News' Pamela Falk from United Nations Headquarters.

On Monday, OPCW Director-General Ahmet Uzumcu said Syrian and Russian authorities had blocked its inspectors from going to Douma and instead offered them 22 people to interview as witnesses. The team arrived in the Syrian capital of Damascus on Saturday.

Journalists in Damascus were prevented by government minders from contacting the OPCW inspectors, and The Hague-based organization refused to comment on "operational details regarding the Douma deployment."

U.N. Secretary-General Antonio Guterres said it was the "obligation of the Syrian government to provide all the conditions for (OPCW inspectors) to work without any restrictions."

U.N. spokesman Stephane Dujarric said on Monday that the United Nations had "provided the necessary clearances for the OPCW team to go about its work in Douma."

British Prime Minister Theresa May accused the Syrian government and its ally Russia of trying to cover up evidence and obstruct the investigation.

The OPCW is investigating reports that government forces gassed sites in Douma on April 7, when the town was still held by rebels and home to tens of thousands of people -- residents and others who were displaced by fighting elsewhere.

Syrian activists said more than 40 people were killed in the alleged attack.

Less than two days later, the Army of Islam rebels surrendered the town, which was the last stronghold in the once rebellious eastern Ghouta region at the doorstep of Damascus.

CBS News correspondent Seth Doane was one of the first Western journalists to reach the site of the alleged chemical attack in Douma -- brought to the heavily damaged building by Syrian security forces. He found residents who spoke of choking on acrid gas after a canister landed on the roof of the building.

The U.S. and France say they have evidence that Syrian President Bashar Assad's military was behind the poison gas attack, but they have made none of that evidence public. On Saturday, the U.S., France and Britain bombarded sites they said were linked to Syria's chemical weapons program.

Journalists were allowed access to Douma on Monday. The Associated Press spoke to survivors and witnesses who described being hit by gas, fainting, and discovering their relatives had died, with foam bubbling around their mouths.

The Syrian government and Russia have denied using chemical weapons and accused rebels, with Western backing, of using such weapons or faking such an attack.

Alexander Rodionov of the Russian military's chemical weapons protection unit said its experts found chlorine and components for producing mustard gas at a rebel laboratory in Douma. He said the canister with chlorine was similar to one shown in images released by activists in the days after April 7.

But French President Emmanual Macron defended the military action in an impassioned and at times angry speech to the European parliament.

He spoke of the "outrage by images we've seen of children, women who died of a chlorine attack."

"Do we sit back, do we defend (human) rights by saying, 'Rights are for us, principles are for us, and realities are for others?' No, no!" the French leader said. "Three countries have intervened, and let me be quite frank: this is for the honor of the international community."

The alleged attack and subsequent military response underscored the challenge that the seven-year conflict in Syria poses for the West. President Donald Trump wants to remove U.S. troops from Syria, where it has been fighting the Islamic State of Iraq and Syria (ISIS).

A new strategy appeared to be crystalizing to let the U.S. leave Syria without relinquishing its interests to Assad government or his allies, Iran and Russia.

Saudi Arabian Foreign Minister Adel al-Jubeir said the U.S.-aligned kingdom could deploy forces from a bloc of mostly Sunni Muslim nations that was established to fight terrorism. He said the Obama administration did not agree to such an offer.

The kingdom has supported Sunni rebel groups fighting Assad's forces, which are backed by Shiite-majority Iran. Saudi Arabia is also a member of the U.S.-led coalition battling ISIS militants.