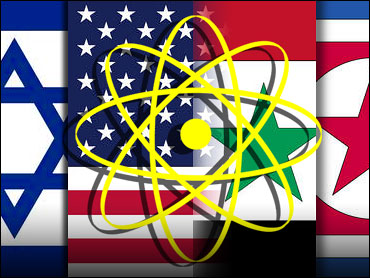 Syria and North Korea denied Tuesday they are cooperating on a Syrian nuclear program, and they accused U.S. officials of spreading the allegations for political reasons -- either to back Israel or to block progress on a deal between Washington and Pyongyang.

A front-page editorial in the government newspaper Tishrin also was critical of the United States for failing to condemn a Sept. 6 Israeli incursion, which it called a violation of international law.

Israel has clamped a tight lid of military censorship over its air raid against Syria, but U.S. officials tell CBS News that the strike destroyed a building Israeli intelligence believed housed nuclear equipment, and that it was launched three days after a North Korean ship docked at a Syrian port.

U.S. officials say the arrival of that ship triggered the strike against the building which had been under surveillance by an Israeli satellite sent into orbit last June, reports CBS News national security correspondent David Martin.

Syria has said only that warplanes entered its airspace, came under fire from anti-aircraft defenses, and dropped munitions and fuel tanks to lighten their loads while they fled.

Andrew Semmel, acting deputy assistant secretary of state for nuclear nonproliferation policy, said Syria may have had contacts with "secret suppliers" to obtain nuclear equipment. He did not identify the suppliers, but said North Koreans were in Syria and that he could not exclude involvement by the network run by the disgraced Pakistan nuclear scientist A.Q. Khan.

Former CIA officer Bruce Riedel says the stakes could not have been higher, adds Martin.

"This was a strike deep inside of Syria, a very audacious move at a time when Israel and Syria have had increasing war fevers. The Israelis must have been going after a very sensitive and important target to take that kind of a risk," says Riedel.

U.S. officials say they do not know for sure what was in the building, but agree with the Israelis that there are signs Syria is trying to acquire a nuclear capability, adds Martin.

"I think for the Syrians, there's only one logical place to look, and that's North Korea. We know North Korea can produce nuclear weapons so that's the address you would go to," said Riedel.

North Korea strongly denied it secretly helped Syria develop a nuclear program, maintaining the charge was fabricated by U.S. hard-liners to block progress in the North's relations with the United States.

A Syrian Cabinet minister ridiculed the speculation about any cooperation with North Korea.

"All this rubbish is not true. I don't know how their imagination has reached such creativity," Bouthaina Shaaban said.

"Regretfully, the international press is busy justifying an aggression on a sovereign state and the world should be busy condemning it instead of inventing reasons and aims of this aggression," he told Lebanon's Hezbollah TV station Al-Manar.

North Korea recently agreed to dismantle its program. Selling its equipment to Syria would fly in the face of U.S. warnings not to transfer nuclear technology. For Syria, a nuclear warhead atop a scud missile would serve as an equalizer against Israel. Martin reports that U.S. officials do not believe Syria is close to acquiring a nuclear weapon, and say the Israeli air strike was intended as a warning: Don't even think about it.

In Vienna, officials for the International Atomic Energy Agency declined comment. But a diplomat associated with the agency said the IAEA "didn't know anything about any nuclear facility in Syria, and if there is something there, we should know."

Syria was the subject of IAEA investigation in 2004 on suspicions it could have been a customer of the nuclear black market run by the Khan network - the same operation that supplied Iran and Libya with materials for their clandestine atomic projects. But the diplomat, who demanded anonymity for discussing confidential information, said the IAEA found no concrete evidence of such activity.

The issue also was raised Tuesday at U.N. headquarters in New York, where Secretary-General Ban Ki-moon told reporters he was awaiting clarification on the "intrusion of Israeli air force into Syrian airspace." Ban said he read North Korea's report denying involvement but did not have any independent information.

The editorial in Tishrin, which reflects Syrian government thinking in a country where the media is tightly controlled, said the U.S. accusations show Washington's pro-Israel bias and have no credibility.

It said Washington was "busy on behalf of Israel circulating claims" that the incursion involved "possible nuclear facilities supplied by (North) Korea."

"The strange thing is that the Americans are talking on behalf of Israel and are providing excuses and concocting new false spins such as talking about presumed Syrian nuclear activity and completely turning a blind eye about the Israeli nuclear danger," the Syrian editorial said.

Israel is widely believed to have nuclear weapons but has never acknowledged it.

The Syrian newspaper said the accusations "recall those false claims that the Americans and the British circulated about Iraq's nuclear programs."

Tishrin was referring to Saddam Hussein's alleged weapons of mass destruction program, one reasons cited by the U.S. for the invasion of Iraq in 2003. No such weapons were found.

It said Washington's "blatant bias toward Israel has hurt - and continues to hurt - the image the United States and its role of justice, fairness and the preservation of international peace."

"The nervousness in relations between Syria and ourselves is over," Peres told foreign reporters in Jerusalem. "We are clearly ready to negotiate directly with Syria for peace."

Peres' comment followed similar remarks Monday by Prime Minister Ehud Olmert, who said he has "a lot of respect for the Syrian leader and for Syrian behavior."

Olmert said he is prepared for peace negotiations with Syria if the conditions are right. He has made the same offer of peace talks before, but this was the first time he has mentioned Syria at all since the reported airstrike. In 2000, Israel-Syria talks neared agreement but broke down over final border and peace arrangements.