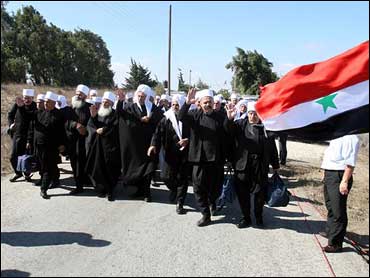 The Israelis broke the sound barrier and "dropped ammunition" over deserted areas of northern Syria overnight, the spokesman was quoted by the official Syrian Arab News Agency.

"We warn the Israeli enemy government against this flagrant aggressive act, and retain the right to respond in an appropriate way," the Syrian spokesman said.

It was not clear if Syria was accusing the Israelis of using warplanes or some type of other aircraft like drones.

"The Israeli enemy aircraft infiltrated into the Arab Syrian territory through the northern border, coming from the Mediterranean heading toward the eastern region, breaking the sound barrier," the spokesman said. "Air defense units confronted them and forced them to leave after they dropped some ammunition in deserted areas without causing any human or material damage."

Israel's army said it had no knowledge of the incident, reported CBS News correspondent Robert Berger.

"Tensions have been running high on the northern border for the past few months, with wide speculation in the Israeli media that war could break out this summer," reported Berger. "Israel has conducted a series of war games on the Golan Heights in the past few months. But a week ago or so, Israel's defense minister said the threat of war with Syria had diminished."

Israel acknowledges flying over Lebanon routinely, but it is unclear how often its aircraft fly over Syria.

At the beginning of last summer's war against Lebanon, Israeli warplanes buzzed the palace of Syrian President Bashar Assad in what analysts called a warning to Damascus. In June of the same year, they also flew over Assad's summer home in the coastal city of Latakia, after Syrian-backed Palestinian militants in Gaza captured a young Israeli soldier.

Meanwhile, Israel allowed hundreds of Arab Druse clergymen from the Israeli-occupied Golan Heights to cross military lines into Syria on Thursday for an annual pilgrimage to a holy shrine.

As the bearded clerics in black robes and white turbans walked some 330 yards through the buffer zone between Israeli and Syrian checkpoints at the town of Quneitra, about 30 miles south of Damascus, relatives welcomed them on the Syrian side.

Six of the 528 clerics were elderly or handicapped and had to be driven to the Syrian side in U.N. buses.

An official at the International Red Cross who supervised the transfer at Quneitra, said that Israeli authorities allowed the pilgrims to stay in Syria for four days. In past years, they were permitted in for two weeks. The official spoke on condition of anonymity because he was not authorized to talk to the press.

Sheik Abdullah Amashah, 65, from the Golan village of Bakata, said he was happy to come and hoped the "peace process would resume" so that families on the two sides of the border "can reunite and live together."

Medhat Saleh, a Syrian government official in charge of Golan issues, said that about 700 Druse clergymen had applied for permission to visit Syria, but that Israel allowed only 528 of them to come. He said the other applicants were turned down for "security reasons or some tax-relating reasons."

(AP)
Also Thursday, Democratic presidential hopeful Dennis Kucinich (left, in Lebanon), on a Mideast visit that included a stop in Syria, said the country lambasted by the Bush administration deserves credit for taking in more than a million Iraqi refugees. The Ohio congressman met with Syrian President Bashar Assad during his visit to Damascus. "What most people are not aware of is that Syria has taken in more than 1.5 million Iraqi refugees," Kucinich said. "The Syrian government has actually shown a lot of compassion in keeping its doors open, and being a host for so many refugees."