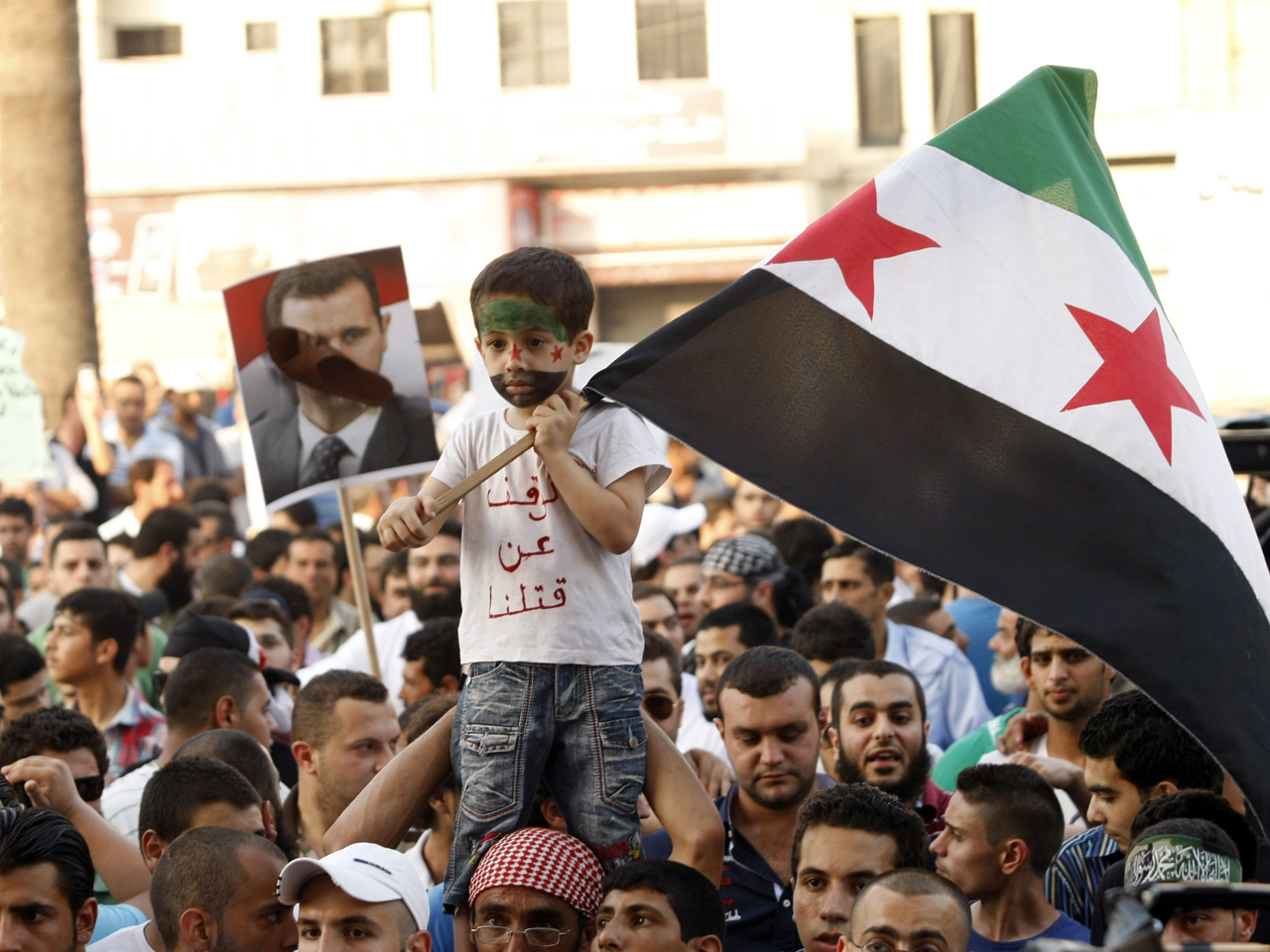 (CBS/AP) After an estimated 14,000 deaths, Syrian President Bashar al-Assad has directed his newly sworn-in cabinet to direct all its energy towards ending the 16-month-old uprising against his rule.

"We live in a real state of war from all angles," Assad told a cabinet he appointed on Tuesday in a speech aired on Syrian state television, according to Reuters. "When we are in a war, all policies and all sides and all sectors need to be directed at winning this war."

Assad has long talked tough on the uprising, frequently referring to the fight against his rule as the work of "foreign terrorists," or simply "armed terrorists." This latest uptick in angry rhetoric is a signal that he may somehow step up the campaign against the rebels that currently control much of the countryside.

In his speech, Assad also brushed aside calls for him to step down, which have begun coming from more than just Western powers recently.

Neighboring Turkey, in particular, has changed from close ally to firm opposition to the Assad regime after one its reconnaissance jets was shot down over the weekend.

Turkey warned Syria on Tuesday to keep its forces away from the countries' troubled border or risk an armed response — a furious reply to the downing of a Turkish military plane last week by the Damascus regime.

UN peacekeeping chief: Too dangerous to resume Syria mission
Syria's rebels not as Islamist as you think - yet
Officials: Syrian army stable despite defections

NATO backed up Turkey and condemned Syria for shooting down the plane but stopped short of threatening military action, reflecting its reluctance to get involved in a conflict that could ignite a broader war.

Near the capital of Damascus, meanwhile, Syria's elite Republican Guard forces battled rebels in some of the most intense fighting involving the special forces since the uprising against President Bashar Assad's regime began in March 2011, according to activists.

Despite global outrage over the crackdown by the Assad regime, the international response has been focused entirely on diplomacy and sanctions, not intervention, as the violence escalates.

In a speech to parliament, Turkish Prime Minister Recep Tayyip Erdogan said Syria shot down the unarmed reconnaissance plane in international airspace without warning in a "deliberate" and "hostile" act.

"Any military element that approaches the Turkish border from Syria and poses a security risk and danger will be regarded as a threat and treated as a military target," Erdogan said.

He said border violations in the region were not uncommon and Syrian helicopters had violated Turkish airspace five times recently without a Turkish response. The two countries share a 566-mile frontier.

Turkey's limited response to Friday's incident suggested there was no appetite for a violent retaliation. Still, Edrogan cautioned Syria against testing his resolve.

"No one should be deceived by our cool-headed stance," he added. "Our acting with common sense should not be perceived as a weakness."

Syrian officials insist the plane violated its airspace, saying a Syrian officer shot it down with anti-aircraft fire after spotting an unidentified jet flying at high speed and low altitude.

Turkey disputes that. Turkey says although the RF-4E jet had unintentionally strayed into Syrian airspace, it was inside international airspace when it was brought down over the Mediterranean. Its two pilots are still missing.

The RF-4E is the reconnaissance version of the U.S.-built Phantom fighter-bomber which was used heavily in the Vietnam War. Most of the RF-4Es were unarmed, although some have been equipped with cannons and racks for bombs.

Erdogan has said Syrian forces also fired on a search-and-rescue plane Friday following the downing of the jet. It was not clear if the second plane was hit.

The incident renewed fears of an escalation of the violence that could draw in neighboring countries. The Turks have launched pre-emptive attacks in the past, notably in 2007 and 2008 against Kurdish rebels in Iraq who used Iraqi territory to strike targets inside Turkey as part of their war for Kurdish self-rule.

The head of NATO called the downing of the jet unacceptable after Turkey briefed NATO's North Atlantic Council about it. The talks were held under Article 4 of NATO's founding treaty, which allows a member to request consultations if its security has been threatened.

NATO Secretary-General Anders Fogh Rasmussen said the alliance condemned the Syrian attack "in the strongest terms" and expressed solidarity with Turkey — but he did not speak of any possible armed action against Syria.

"It's my clear expectation that the situation won't continue to escalate," Fogh Rasmussen told reporters after the meeting. "What we have seen is a completely unacceptable act, and I would expect Syria to take all necessary steps to avoid such events in the future."

The uprising against Assad has obliterated the once-close ties between Syria and Turkey. Turkey has repeatedly called for Assad to step down as 33,000 Syrians have sought refuge in Turkey from the violence.

Turkey also is also hosting civilian opposition groups as well as members of the Free Syrian Army, which is fighting to bring down the Assad regime.

"We will continue to support the struggle of our brothers in Syria at any cost," Erdogan said. Turkey denies harboring armed Syrian rebels.

Fogh Rasmussen has repeatedly said NATO would need a clear international mandate and regional support before it embarked on a mission in Syria. Last year, NATO launched airstrikes on Libyan government targets only after receiving such a mandate from the U.N. Security Council, along with backing from the Arab League.

But Russia and China — both veto-wielding members of the Security Council — have stood by Assad and shielded his regime from international sanctions. Both countries are keen to avoid any type of military intervention in Syria, and they vow to veto any attempts.

Military intervention has been all but ruled out in Syria for now, in part because the conflict has so much potential for escalation. Damascus has strong allegiances to powerful forces including Lebanon's Hezbollah and Shiite powerhouse Iran.

Russia's president and foreign minister repeated Tuesday that Iran should take part in a meeting on the Syrian crisis in Geneva, slated for Saturday.

"The more of Syria's neighbors that are brought into this process the better," President Vladimir Putin told Russian journalists traveling with him in Jordan. Foreign Minister Sergey Lavrov said he will take part in the Geneva meeting even if Iran is not represented, but without Iran, "we will be talking about how then to gather all of the participants."

A deputy to international envoy Kofi Annan told a closed Security Council meeting that the principles and guidelines for a Syrian-led political transition must be agreed on before the Geneva meeting can happen, a diplomat said on condition of anonymity because the meeting was not public.

The diplomat said that Nasser Al-Kidwa, a deputy joint special envoy of the United Nations and the Arab League on Syria, told the council Tuesday that Annan believes the meeting he is trying to organize will only be worth holding if participants can agree on how a Syrian political transition should work, and can't simply be a "talking shop."

As part of a U.N.-Arab League peace plan that failed to take hold in Syria, U.N. observers were sent to the country, but they suspended their work earlier this month after coming under fire. The U.N.'s peacekeeping chief, Herve Ladsous, told the Security Council on Tuesday that it is too dangerous for the observers to resume their mission, although it could restart at some point, according to a diplomat who spoke on condition of anonymity because the session was closed.

Assad blames the violence gripping his country on foreign terrorists and armed gangs. In the early months of the uprising, he acknowledged a need for political reforms, but his opponents have dismissed his gestures as a facade.

Tuesday's fighting near Republican Guard compounds and bases in the suburbs of Damascus killed at least six people, according to the Britain-based Syrian Observatory for Human Rights.

The Republican Guard, which is commanded by Assad's younger brother, Maher, has the task of protecting the capital, the seat of the regime's power. The fighting suggested growing boldness by the rebels.

Clashes erupt regularly in the suburbs between troops and rebels, but Assad's forces have firm control of Damascus and it is very rare for fighting to take place near the Republican Guard bases. It was unclear what prompted the clashes or how close they were to the heavily guarded compounds.

Syria's military remains loyal to Assad despite some recent high-profile defections, and the opposition is fragmented and unable to attack as a unified force, according to U.S. intelligence officials who briefed reporters in Washingon on the Syrian conflict.

The regime has maintained troop loyalty by keeping paychecks coming even as food and fuel run out for the rest of the country, the officials said, speaking on condition of anonymity to provide the sensitive information

The officials say the opposition has learned effective guerrilla-like tactics, but is still too disorganized to hold territory, which will likely produce a continuing "seesaw" battle between the two sides.

Also Tuesday, Syria's new Cabinet was sworn in in front of Assad.

Although he vowed after May 7 parliamentary elections to make the government more inclusive to politicians from other parties, the new government is headed by a key loyalist, and the foreign, defense and interior ministers kept their jobs.

The opposition boycotted the elections, saying they were designed to strengthen Assad's power. Parliament is considered little more than a rubber stamp in Syria, where the president and a tight coterie of advisers hold the real power.

During the swearing-in, Assad said Syria must direct all its energy to overcoming the conflict.

"We are living in a genuine state of war," he said.