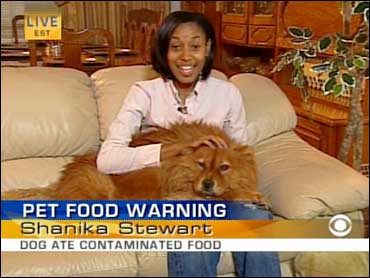 Dog and cat food, sold under the brand names "Diamond," "Country Value" and "Professional," was pulled from store shelves by Diamond Pet Foods, but is blamed in the deaths of at least 76 dogs nationwide.

Diamond says it contained a dangerous fungus byproduct. The naturally-occurring chemical, which is found on corn, can cause serious liver damage in animals.

Read about the recall.

Read Diamond's statement about the recall. It contains specific information about the products and chemical involved.

On The Early Show Tuesday, co-anchor Hannah Storm
spoke with
Shanika Stewart, of Columbia, S.C., who lost one of her dogs, and who has another who is very sick.

Stewart says, after her pit bull died, she was rubbing the belly of her other dog, Cocoa when she "noticed that she had the yellowish tint also to her belly (that her pit bull had). I turned on the news and I saw the recall for the Diamond pet food on there, and I just put two-and-two together.

"They were both fenced in all day and that's the only thing they could have gotten into. We took Cocoa to the vet the following day and they did say it was aflatoxin food poisoning that she had also."

Cocoa is very ill, Stewart says: "She hasn't eaten anything in about three weeks. I have to force-feed her through a syringe six times a day to keep her calories up, so she'll have the energy and everything she needs to restore her liver."

Cocoa needs seven medications twice a day. Stewart says her family has spent some $3,500 on vet bills to date, but, "She is going to have to have care for the rest of her life. It was permanent liver damage. She has to go back to the vet once a week for blood testing. So, it's been difficult. Very difficult."

Diamond has offered to reimburse the Stewarts for those vet bills, she says.

Diamond didn't return calls about the matter made by The Early Show.

Dr. Center, the Cornell vet, told Storm the illness involved has "a very confusing onset of clinical signs. There's a delayed effect of this toxin. The first thing pet owners will observe is a lack of appetite. Some of these dogs have not wanted to eat their food and the heartbreaking part of this is that many owners doctored the food, put gravies in the food to induce the dog's consumption of this contaminated product. Some of the dogs that we've treated actually were getting on the counters at home and swiping the humans' food to get something that they thought was more palatable.

"So, the onset of signs is usually lack of appetite. They start vomiting. They're lethargic. Owners notice they're not quite right. It's very vague for the veterinarians as well. Gradually, they start passing blood in their stool and vomiting blood. And in the most severe form, the terminal stages, these animals bleed to death, usually into their gastrointestinal tract. The dogs turn jaundiced very late in the development of the toxic syndrome. Jaundice is the yellow discoloration. It's a very complex toxin and it doesn't outright kill the liver cells. And it does not behave as we normally expect toxins in the liver to behave."