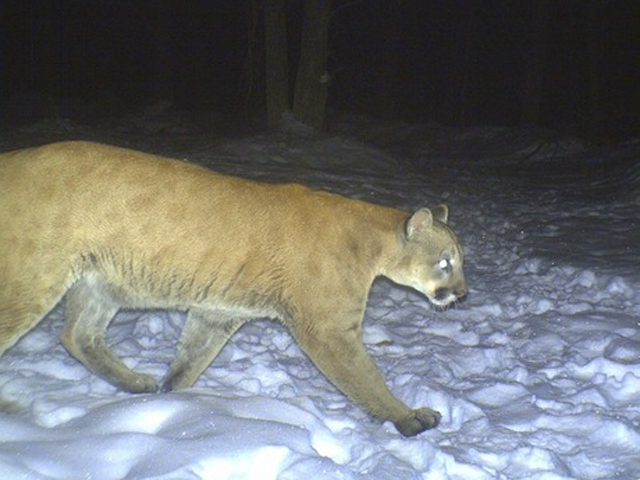 A cougar hit and killed by a car in Connecticut set a record this week when it was found to hail from the Black Hills of South Dakota. While the 140-pound cat is unprecedented in its wanderings, wildlife biologists say that many wild animals have started recolonizing old habitats — or establishing new ones.

From the reappearance of wolves in Wisconsin to the southern march of moose across the Northeast, the spread of wildlife is a result of reforestation and conservation efforts, such as the Endangered Species Act of 1973, biologists said. Even the birthplace of the Connecticut cougar was once free of mountain lions, said Adrian Wydeven, a mammalian ecologist at the Wisconsin Department of Natural Resources. In recent decades, the animals moved back into the Black Hills from Wyoming.

"It demonstrates that these large carnivores can return to areas where they had once existed, if they're given adequate protection," Wydeven told LiveScience.

The Connecticut cougar lived a full life in its two to five years. Earlier this year, people started reporting sightings of a mountain lion near Greenwich, Conn. State officials receive reports like this all the time, said Paul Rego, a wildlife biologist at the Connecticut Department of Energy and Environmental Protection. But none had ever been confirmed before.

This time was different. Droppings, paw prints and photographs proved there was a real lion on the loose, though no one knew if it was wild or a poorly thought-out pet that someone had released.

On June 11, the male mountain lion died after a sport utility vehicle hit it near the city of Milford. Then, on July 26, wildlife officials made a stunning announcement: DNA evidence revealed that the cougar had traveled about 1,500 miles (2,414 kilometers), passing through Minnesota and Wisconsin more than a year ago before arriving in the Northeast. The previous travel record for a cougar was 663 miles (1,066 km), Wydeven said.

Male cougars require their own territory, Wydeven said, so young males often have to stray far afield of the land where their fathers roam. The young wanderers keep walking until they find a suitable spot with female cougars to mate with. When the Connecticut cougar failed to run into any females, he just kept walking, scientists suspect. [Top 10 Most Incredible Animal Journeys]

On the trail of wandering wildlife

The cougar made it a record-breaking distance, and wildlife officials say that his appearance in Connecticut was a fluke: There is no established population of mountain lions in the area and the animals are unlikely to plant themselves in the suburbs of New Haven or Hartford anytime soon. But there are plenty of other examples of animals showing up where they haven't been spotted for decades. The reasons for the expansion vary from reforestation measures that extend previously unlivable habitats to acclimation to living near humans, as coyotes have done.

In Connecticut, Rego said, moose and black bears have begun to filter down from the north, as have fishers, which are members of the weasel family. For almost a century, coyotes have been creeping eastward and are now firmly established across both the Northeast and the Southeast United States. Coyotes are notable in that they aren't recolonizing old territories; the eastern U.S. is new ground for them.

In California, a single wolverine caused a stir in 2008 by showing up in the Sierra Nevada Mountains. Using DNA samples from fur and feces, the U.S. Department of Agriculture's Forest Service Wildlife Genetics Laboratory in Missoula, Mont., found that the wolverine hailed from a population of the animals in the Sawtooth Mountains of Idaho, 600 miles (1,000 km) away, a journey that the laboratory's conservation genetics team leader Michael Schwartz called "just incredible."

Schwartz, whose lab also identified the Connecticut cougar, said that the lab does occasionally see incredible animal journeys. One fisher, tagged with a radio collar in Idaho, was regularly wandering in a range of 43 miles (69 km) — no small distance for an animal that weighs less than 10 pounds (4.5 kilograms). Cougars moving eastward are fairly new phenomena, Schwartz told LiveScience. Fortunately, the lab works with states, universities and Native American tribes to maintain a database of wildlife DNA crisscrossing the country. That makes it possible to track a single animal, proving, for example, that the Connecticut cougar was one individual being sighted again and again rather than a whole new population of mountain lions.

The future of mountain lions

In Wisconsin, where the cougar left droppings and footprints as it passed through in 2009 and 2010, there have only been four confirmed cougar visitations. But wolves have naturally moved back into the state thanks to federal protection of the species, Wydeven said. There are now about 800 wolves in Wisconsin.

Cougars may eventually follow, but Wydeven doesn't expect it to happen soon. The animals took decades to establish themselves in South Dakota, he said.

"In the 1970s, I did my master's research in the Black Hills of South Dakota, and at the time, rumors of cougars roaming about were similar in the Black Hills to what they are now in Minnesota and Wisconsin, so an occasional animal had been sighted," Wydeven said. Now, he said, there are about 250 mountain lions that call the Black Hills home.