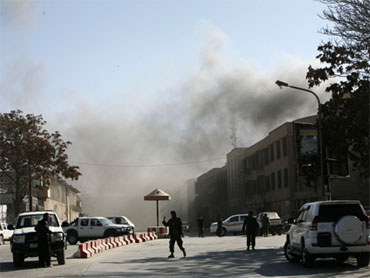 Taliban militants wearing explosive vests launched a brazen daylight assault Monday on the center of Kabul, with suicide bombings and gunbattles near the presidential palace and other government buildings that paralyzed the city for hours.

The assault by a handful of determined militants dramatized the vulnerability of the Afghan capital, undermining public confidence in President Hamid Karzai's government and its U.S.-led allies.

The attacks also suggested that the mostly rural Taliban are prepared to strike at the heart of the Afghan state - even as the United States and its international partners are rushing 37,000 reinforcements to join the eight-year war.

The violence began shortly before 10 a.m. and persisted until mid-afternoon with attacks at four locations within an area of less than one square mile (2 1/2 square kilometers).

CBS News correspondent Mandy Clark reports from Kabul that the brazen attack took place just as Karzai was swearing-in new members of his cabinet. There were reports that some of the fighters may have posed as members of the Afghan security forces - a tactic frequently used by Taliban militants in Afghanistan.

Presidential spokesman Waheed Omar said the ceremony occurred as scheduled and that everybody in the palace was safe.

In the first assault, a suicide bomber detonated his explosives at Pashtunistan Square, a major intersection near the gates to the presidential palace, the Central Bank and the luxury Serena Hotel, which is frequented by Westerners.

Clashes broke out as other militants fought with Afghan troops, who converged quickly on the scene in pickup trucks and armored vehicles. Police sealed off the area and helicopters buzzed overhead.

Several attackers then stormed into a nearby shopping mall, prompting a standoff with security forces. Two bombers were killed when their explosives detonated, setting the four-story building ablaze.

About 11:17 a.m., another suicide attacker drove toward the area in an ambulance but blew himself up after he was challenged at a checkpoint near the Education Ministry.

At about 1 p.m., three other attackers entered another commercial building housing offices and stores, holding off security forces for about two hours before they were killed.

Details were provided by Interior Minister Hanif Atmar at a press conference.

The dead included an intelligence agent, two policemen and two civilians, including one child, according to Atmar. He said 71 other people were wounded, including 35 civilians. Most of the injuries were caused by hand grenade attacks hurled by the militants, he said.

Taliban spokesman Zabiullah Mujahid told The Associated Press that 20 armed militants, including some with suicide vests, had entered Kabul to target the presidential palace and other government buildings in the center of the capital. Afghan authorities said seven militants were killed but that it was possible others were burned in the shopping center blaze.

It was the biggest assault on the capital since Oct. 28, when three gunmen with automatic weapons and suicide vests stormed a guest house used by U.N. staff, killing at least 11 people including five U.N. workers. Taliban suicide bombers and gunmen also struck government buildings in the capital in February 2009, killing more than 20 people.

But Monday's fighting persisted longer than any initiated by the Taliban in the capital since they were driven from power by the U.S. and its allies in 2001.

Flights into Kabul International Airport were suspended for several hours. Many shops closed, and the city's normally congested streets were largely empty of vehicles. Large plumes of white smoke rose into the cloudless sky.

At the Finance Ministry, employee Emal Masood said he and his colleagues were evacuated into the corridors while Afghan government forces used the roof to fire on militants in nearby buildings.

"The fight was intensifying moment by moment," he told BBC Television by phone. "We were able to see the fear in everybody's eyes."

The top U.S. and NATO commander, Gen. Stanley McChrystal, said the attack was "yet another example of (Taliban) brutality and contempt for the Afghan people."

However, many Afghan civilians expressed alarm that their city was so vulnerable despite the presence of thousands of Afghan security forces.

"Today it looks like a coup," said Abdul Rahman Hamedi, 38, who ran with his son from his shop. "Everybody said, `The city is full of suicide bombers."'

Abdul Jabar, an Afghan policeman from Helmand Province, said thousands of foreign forces have been sent to Afghanistan yet "why are they not able to stabilize Afghanistan?"

"Nobody is secure," Masood told the BBC. "You never know when you leave your house whether you're going to come back alive to your family."

Most of the fighting has occurred in the southern and eastern provinces that are the homeland of the Pashtuns, the ethnic group from which the hardline Islamist Taliban draws nearly all of their members.

Since August, however, the militants have stepped up their attacks in Kabul, including car bombings at NATO headquarters, the Indian Embassy and near the home of a former vice president in addition to the attack on the U.N. workers.

NATO officials speculated that Monday's attack may have been timed to upstage preparations for a Jan. 28 major international conference in London on ways to shore up the Afghan government.

U.S. Lt. Gen. David Rodriguez, the No. 2 U.S. commander in Afghanistan, blamed the attack on the Haqqani network, an al Qaeda-linked Afghan Taliban faction based in Pakistan. The group also was believed to be linked to the Dec. 30 suicide bombing against a remote CIA base that killed seven of the agency's employees in Afghanistan's Khost province.

"They are desperate people; they are ruthless," he said from New Delhi after a trip to Afghanistan. "The people who are doing this certainly will not survive the attack, nor will they succeed. But we can expect these sort of things on a regular basis."