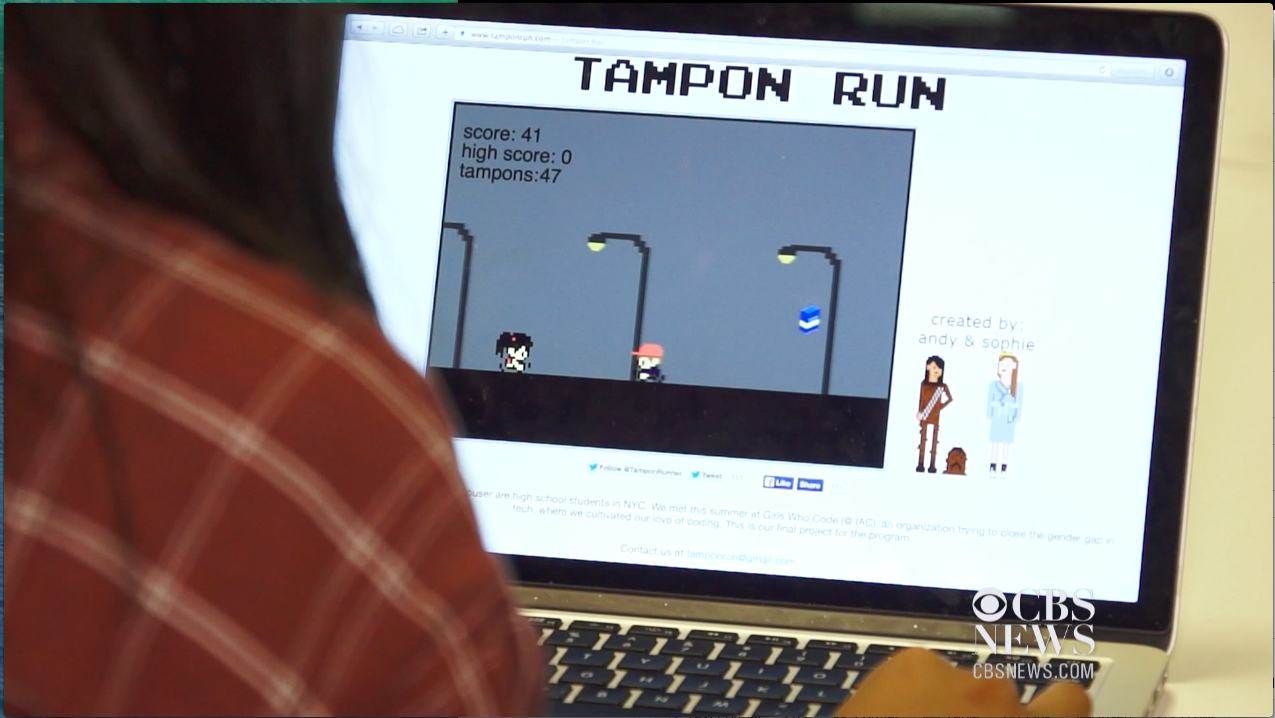 As the go-to entertainment choice for American kids (not to mention millions of adults), the video game industry is huge, grossing more than $15 billion a year. Many of the most popular games include graphic images of violence, guns, and sex, and some have been criticized for the way they depict women in extremely violent scenes.

Enter two New York City high school girls, Andrea Gonzales and Sophie Houser, part of a new wave of feminist gamers. The girls are using a computer game they developed called Tampon Run to empower women in the gaming community, inspire other young female coders and game developers, and change the conversation around menstruation, all at the same time.

"I had been pretty vocal about wanting to make a video game that maybe had a feminist twist on it, because there's a big issue right now with the sexualization of women in video games," Gonzales told CBS News. "I wanted to do something about that."

Their timing couldn't be better, as the controversy dubbed "Gamergate" continues to rock the gaming world. The digital culture war pits critics of the way women are depicted in video games against some outspoken, mostly male gamers who defend the status quo as a matter of free speech, and whose online posts sometimes escalate into vicious personal attacks and threats.

Just last week, the tech and media critic Anita Sarkeesian, a leading voice against sexist and violent depictions of female characters in gaming, cancelled a speech at Utah State University after the school refused to bar weapons from the auditorium despite receiving death threats. Undeterred, Sarkeesian has developed a web series called Tropes vs Women in Video Games which aims to "examine the plot devices and patterns most often associated with female characters in gaming from a systemic, big picture perspective."

Times are changing, Sarkeesian points out. Women and girls now make up almost half (48 percent) of those playing video or computer games, according to the Entertainment Software Association.

Houser and Gonzales want to build on that trend. They met at Girls Who Code, a summer program that teaches computer coding to girls in order to help close the gender gap in tech. After much discussion about their mutual desire to create a game that also spoke to social change, they developed Tampon Run as their final project for the program.

Houser explained that the inspiration behind Tampon Run stemmed from a Texas court case in which tampons and maxi pads were confiscated out of fear they would be used as projectiles. Their vision clearly comes across when playing the game. In Tampon Run, our heroine survives by collecting boxes of tampons and hurling them at her enemies.

Women are, by and large, underrepresented in the technology industry. Only 23 percent of computer programmers are women, according to the U.S. Department of Labor. "It's so important to have women in the tech industry, because it brings a diversity of ideas that you wouldn't have if they aren't present," Houser says.

But Houser and Gonzales are hoping to reach males as well, and they've received an overwhelmingly positive response. Their lighthearted and not-so-bloody game is rapidly catching on around the United States. Andy shared that a boy in California emailed her his high score: over 5,000 points.

"I had a guy friend that would shut down whenever we would talk about menstruation," she said. "When he played the game he realized that and said, it doesn't make sense to do that."