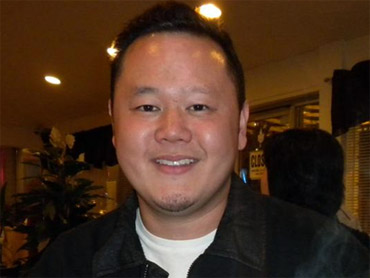 When he was 22, Jet Tila was so impassioned about cooking that he taught cooking classes in his backyard in Los Angeles. It became such a phenomenon that the Los Angeles Times took notice, and since then, there's been no stopping him.

Jet is now considered one of the nation's top chefs - and among the best at making Asian fusion cuisine, putting his classic training to good use.

He's executive chef of the world-famous Wazuzu in Encore of Wynn, Las Vegas.

But is all that enough for him to prepare a three-course dinner for four on a budget of only $40?

Viewers of "The Early Show on Saturday Morning" found out when he accepted our "Chef on a Shoestring" challenge.

And Jet was automatically entered in our "How Low Can You Go" competition, in which the "Shoestring" chef who has the lowest ingredients costs will be invited back to cook our holiday extravaganza - right around the corner now!

He made the entrée picked by viewer voters: Tangy Fried Chicken. For an appetizer, he had Asian Pear Salad, and dessert was Pineapple Slushie.

Jet demonstrated how to make an Asian fusion meal without any difficult techniques or foreign ingredients. The salad was a simple, julienned pear with arugula and hazelnuts. The dressing was simply mixed together in a blender.

The chicken wasn't your typical Americanized version. Traditional Asian cooking has fried chicken cooked twice, par baked, then fried. And there is no coating in flour. The skin is what creates the crispiness.

Finally, he had the pineapple slushie, a perfect tangy way to cut through the grease of the chicken.

Incidentally, we usually ask viewers to vote by cell phone for their choice of entrees the following week's Chef on a Shoestring should prepare. But since our chef next week will be making a Thanksgiving feast -- we think we know what the pick would be!

There are Japanese as well as Chinese rice vinegars, both made from fermented rice, and both slightly milder than most Western vinegars. Chinese rice vinegar comes in three types: white (clear or pale amber), used mainly in SWEET-AND-SOUR dishes; red, a popular accompaniment for boiled or steamed crab; and black, used mainly as a table CONDIMENT. The almost colorless Japanese rice vinegar is used in a variety of Japanese preparations, including SUSHI rice and SUNOMONO (vinegared salads). Rice vinegar can be found in Asian markets and some supermarkets.

Also called rocket, roquette, rugula and rucola, arugula is a bitterish, aromatic salad green with a peppery mustard flavor. Though it has long been extremely popular with Italians, American palates often find its flavor too assertive. Arugula (which resembles radish leaves) can be found in specialty produce markets and in some supermarkets. It's sold in small bunches with roots attached. The leaves should be bright green and fresh looking. Arugula is very perishable and should be tightly wrapped in a plastic bag and refrigerated for no more than 2 days. Its leaves hold a tremendous amount of grit and must be thoroughly washed just before using. Arugula makes a lively addition to salads, soups and sautéed vegetable dishes. It's a rich source of iron as well as vitamins A and C.

Also known as Indian date , the tamarind is the fruit of a tall shade tree native to Asia and northern Africa and widely grown in India. The large (about 5-inch-long) pods contain small seeds and a sour-sweet pulp that, when dried, becomes extremely sour. Tamarind pulp concentrate is popular as a flavoring in East Indian and Middle Eastern cuisines much like lemon juice is in Western culture. It's used to season full-flavored foods such as CHUTNEYS, CURRY dishes and pickled fish. Additionally, tamarind is used to make a sweet syrup flavoring soft drinks. It's also an integral ingredient in Worcestershire sauce. Tamarind can be found in East Indian and some Asian markets in various forms: jars of concentrated pulp with seeds; canned paste; whole pods dried into "bricks" or ground into powder. Tamarind syrup can be found in Dutch, Indonesian and East Indian markets.

Milk from which almost all the moisture has been removed. Dry (also called powdered) milk is less expensive and easier to store than fresh milk but has a disadvantage in that it never tastes quite like the real thing. It comes in three basic forms - whole milk, nonfat milk and buttermilk. Because of its milk fat content, dry whole milk must be refrigerated. Nonfat dry milk is available in regular and instant forms; the former tastes slightly better, while the latter mixes more easily. Powdered buttermilk is simply desiccated buttermilk and is generally used for baking. Until opened, dry nonfat milk and buttermilk can be kept in a cool, dry place for up to 6 months. Refrigerating opened packages will help retain their freshness. A USDA "U.S. Extra Grade" shield on the label signifies that the product meets exacting government quality standards. Dry milks may or may not be fortified with vitamins A and D.

Combine all ingredients for the dressing in a blender. Blend on high speed for about 30 seconds or until all of the ginger is well-pureed.

Place the arugula on the salad plates and top with the Asian pear strips. Dress that with your prepared ginger dressing and top with slivered almonds and hazelnuts.

For more of Jet's recipes, go to Page 2.

Combine all ingredients for the marinade in a large bowl, or deep non reactive baking dish. SET HALF THE MARINADE ASIDE for the sauce later. Marinate the pieces of chicken for 4 hours or up to overnight.

Preheat your oven to 375 degrees, and position a rack in the middle.

Remove chicken pieces from the marinade and pat dry. Place chicken on a baking sheet or in a shallow baking pan. Place pan in the oven, and bake Chicken the oven for about 35 minutes until just cooked through. Remove from oven and allow to cool.

Heat about 1 quart of oil in a dutch oven or cast iron skillet to 375 degrees. Fry until golden brown. Serve chicken with the set aside marinade for dipping sauce.

OPTION: The traditional way to serve this dish is to top it after cooking with a little clarified butter.

2. Add remaining crushed ice and blend until thick and smooth, about 30 seconds longer.

3. Pour 1 cup mixture into each of four 8-ounce serving glasses.

Garnish with Whipped cream and Pineapple wheels, if desired.

So, how did Jet fare in our "How Low Can You Go?" competition?