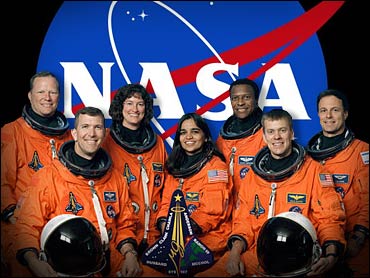 NASA has released transcripts from some of Columbia's final radio transmissions, chronicling the efforts of Mission Control engineers as they became painfully aware that the shuttle had broken apart on its return to Earth.

The assessment came in the final six or seven minutes of the flight.

"I just lost four separate temperature transducers on the left side of the vehicle, the hydraulic return temperatures," Kling says.

Flight director Leroy Cain quickly asks if there is anything common to the sensors. Kling replies there is no commonality, suggesting there a general failure instead of a single system.

Cain asks Mike Sarafin, the guidance and navigation officer, if everything appears normal with the shuttle flight control. Sarafin assures him, "I don't see anything out of the ordinary."

There is a short indistinct call from the spacecraft and, almost at the same time, Kling says the landing gear tires have lost pressure.

Capsule communicator Charlie Hobaugh then addresses the spacecraft: "And Columbia, Houston, we see your tire pressure messages and we did not copy your last.

Communication with Columbia was never regained. At Mission Control, flight controllers begin going over their last data from the shuttle and report more problems, including the loss of several sensors.

Hobaugh begins a series of radio calls to Columbia. There is no response as the minutes tick down toward a planned landing at the Kennedy Space Center.

"MILA (the Kennedy spacecraft communication center) is not reporting any RF (radio frequency) at this time," says Bill Foster, a ground controller.

"OK," says Cain, who then asks hopefully when a radar signal was expected.

"One minute ago, flight," comes the response from Richard Jones, flight dynamics officer.

The communication checks continue. So does the silence. A radar station near the Kennedy center then says it is putting its radar in a "search mode."

"We do not have any valid data at this time," said Jones. He said there was a "blip" but it was bad data.

Then a long pause, a silence of despair. Then Cain says the final words, the phrase that marked the lack of hope: "Lock the doors."

This meant nobody could leave Mission Control or even make phone calls. For the next several hours, the engineers have to ignore the certain loss of the crew and store the data in their computers, finish reports and then write personal accounts of what they saw, heard and did Feb. 1.